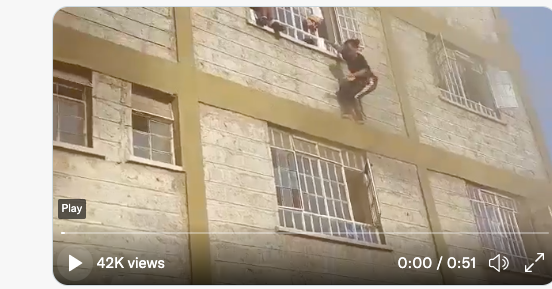 A video has appeared online showing how several students of Buruburu Girls High School escaped the fire that occurred in their school late on Sunday evening.

The fire started at around 5 pm.

“I can confirm that several students have been admitted at Metropolitan Hospital. We are yet to establish the cause of the fire but we have commenced investigations into the incident,”  Buruburu sub-county police boss Francis Kamau, said.

The fire is said caught one of the dormitories that houses 112 students from different classes.

Below is a video of students jumping out of windows to escape the fire.

I was so terrified of the Buruburu girls video till I saw this vida. pic.twitter.com/uxkY5nL8kv