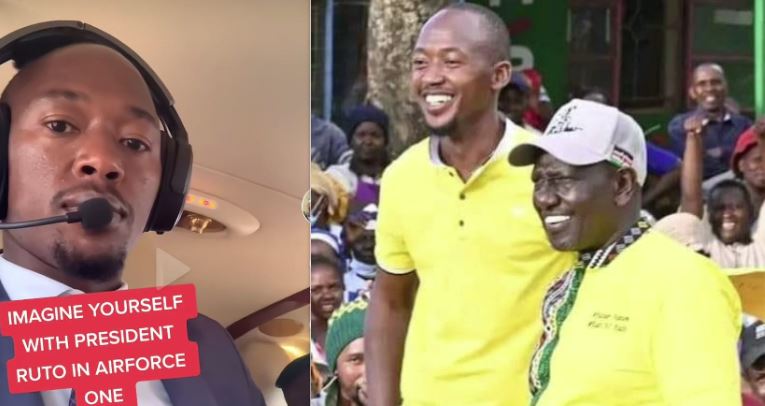 On Saturday, October 29, 2022, videos of President William Ruto and his deputy, Rigathi Gachagua, were captured as they flew to various locations on official aircraft.

These videos were captured by members of the leaders’ entourage and posted on social media, much to the dismay of numerous Kenyans.

In one of the films, Deputy President Rigathi Gachagua was captured on camera by a passenger sitting across from him inside the official aircraft of the Office of the Deputy President.

The footage also shows everyone else sat in the same row of the cabin as DP Gachagua.

Another video shows President Ruto being videotaped by someone sitting next to him in the presidential military helicopter.

The man who recorded the video captioned it as he also revealed his own face: “Imagine youself with President Ruto in Air Force One.” (sic)

If you had an opportunity to fly on #The #Airforce with the #president William Samoei Ruto, just you and the president, what would you tell him? Jamani Mungu halali! #blowthisup #foryou #viral #fypage #tiktoker #Kenya

As these recordings gained popularity, strong criticism of individuals who surrounded the national leaders developed, with claims that they violated their privacy and disregarded military regulations.

Saddique Shaban, a journalist from Kenya, was one of the dissenting voices who questioned what law enforcement was doing when citizens exposed the leaders in public.

Members of William Ruto’s core VIP ring squad post footage online while flying in a military jet. When will the intelligence community do action to protect the privacy of its VIPs? Why do folks who are fortunate enough to go on VIP yachts feel the need to record onboard and broadcast images of their hosts in the cabin?

“William Ruto core VIP ring squad members share videos online onboard the military aircraft. When will the intelligence services finally act and secure the privacy of their VIPs? Why do those privileged enough to share VIP transportation vessels see the need to film onboard and share visuals of their hosts in the cabin?

READ ALSO  Mustafa was too controlling- Marya
Related Topics:Gachaua SecurityNews
Up Next