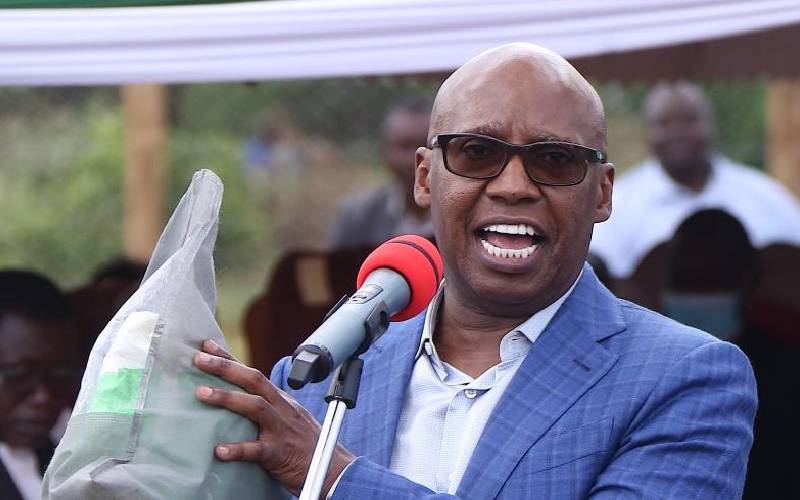 Presidential hopeful and businessman Jimmy Wanjigi (pictured) has criticised the current crop of politicians eyeing the presidency in next year’s general election.

He spoke to Linus Kaikai on Sunday night during a Live Prime time interview from his palatial home in Muthaiga, Nairobi.

Earlier in the day, he had expressed similar sentiments  after attending a church service at ACK St Peters, Nyeri town.

Wanjigi cited ODM leader Raila Odinga, whom he said has played his role in shaping Kenya’s politics but has few solutions for Kenya’s current problems.

It is do or die for Kalonzo, Raila and Mudavadi in the 2022 General Election

Plans for Uhuru succession: Why the opposition is no longer at ease

Between Uhuru and the DP, one of them is dishonest, says Isaac Ruto

Wanjigi urged the Kenyan electorate to take its role as that of David from the Bible, and slay ‘Goliath’ the giant of poor governance, in next year’s election.

He said Raila, Wiper’s Kalonzo Musyoka, Moses Wetang’ula of Ford Kenya and Amani’s Musalia Mudavadi have been in political leadership for decades and are yet to solve Kenya’s challenges.

The businessman has in the past said he will run for president as a demonstration of how democracy works in the country.

He said he would run against Raila despite being his close ally.

“Raila is my great friend. I will run against him to show Kenyans how democracy works in this country. We will compete and make sure the election is free and fair,” Wanjigi added.

He expressed great confidence that he would win next year’s polls if the election is fairly conducted, adding that it is time for fresh leaders.

READ ALSO  How President Ruto is celebrating his birthday

“This time I shall not be king making. I shall address the rest of your questions at the appropriate juncture,” Wanjigi said.

Meanwhile, ODM has accused businessman Wanjigi, who is hoping to run on the party’s ticket in next year’s presidential election, of jumping the gun by launching campaigns.

Chairman John Mbadi dismissed meetings the tycoon has been holding with people he said are delegates of the Raila Odinga-led party, saying the party’s election’s board is yet to ratify the list of the representatives.

He urged Wanjigi to wait until the party announces the legitimate delegates before he embarks on presidential campaigns.

“The party’s election board has not ratified the common and authentic list of delegates for those who wish to contest the presidency on an ODM ticket. The board will announce the time for campaigns,” Mbadi said.

He called on those seeking the party’s ticket to wait until the list is out as this will also save them from falling prey to conmen. “Let them wait so they can seek the support and votes of authentic delegates,” he told The Standard in a telephone interview.

Mbadi faulted Wanjigi for embarking on campaigns prematurely in a move that appears to have rattled some ODM stalwarts. “It is not yet time for campaigns. The ODM elections board is in the process of harmonizing the list of delegates before embarking on grassroots election across the country.”

VIDEO: Victoria Rubadiri leaves for London, here is why you won’t see her on tv for 3 months

Here, it’s an honour for men to buy groceries for wives