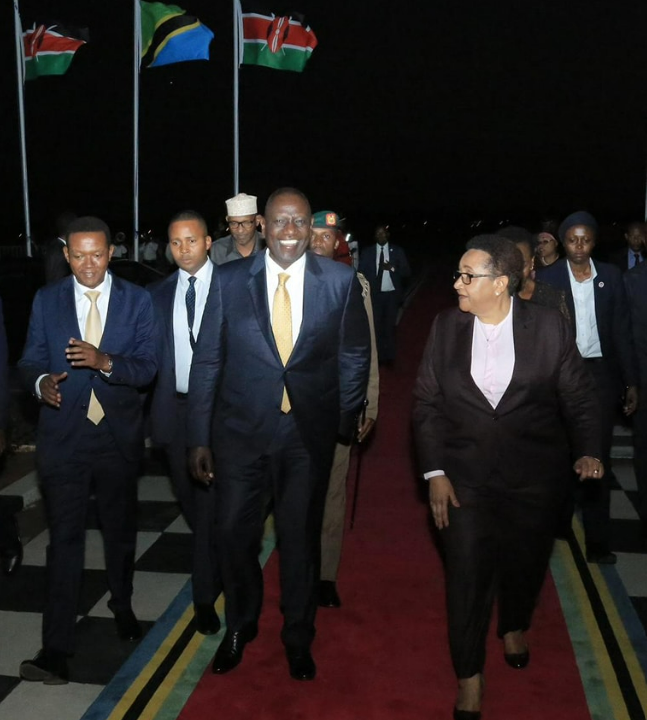 Kenyan President William Ruto arrived in Tanzania on Sunday evening ahead of  a two-day official visit, accompanied by his wife Rachel Ruto, among others.

The president and his delegation, which includes Foreign Affair CS nominee Alfred Mutua, was welcomed to Tanzania by the country’s Foreign Affairs minister Dr. Stergomena Tax.

On Monday, the Head of State will pay a visit to his Tanzanian counterpart, Samia Suluhu, at State House in Dar es Salaam, where they are expected to hold bilateral talks.

According to a Tanzanian government communiqué, President Ruto will then address the media before attending a luncheon at the Tanzanian State House.

Details about the President’s visit were scanty but analysts say on top the agenda will be trade between the two nations.

Kenya’s exports to Tanzania jumped the highest in East Africa by 46 per cent to $236.7 million extending a good trade run between the pair amid ongoing elimination of non-tariff barriers.

Ruto’s visit comes at a time when he and President Samia Suluhu Hassan promised to continue working together to bring social and economic development to their people and East Africa in general.

By making Tanzania the second country to visit in the Seven-nation East African Community (EAC), it signals that the relationship between Tanzania and Kenya is getting stronger.

When the two heads of state met in Nairobi in September Ruto wrote on his Twitter page saying his Government will cooperate with Tanzania in trade, agriculture, security and other areas.

On the other hand When President Samia spoke at Ruto’s swearing-in ceremony, she congratulated Kenyans for showing maturity in the elections held on August 9 and assured them that Tanzania will continue to cooperate with Kenya to bring about development.

“The promise of the East African Community (EAC) will only be realized when our borders transition from barriers to bridges of opportunity.

A borderless EAC will harness wealth and catalyze growth for the prosperity of our nations through unhindered movement of goods, services and people,” he said.

Mitumba clothes are from dead people in USA, Europe – Museveni