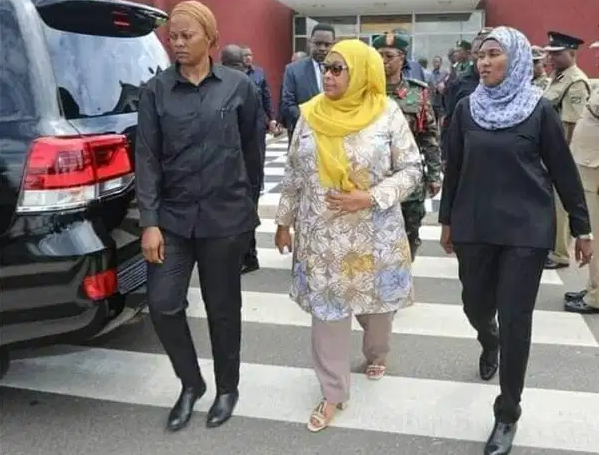 As a practicing Muslim, and now fasting during Ramadhan, tradition dictates that she is assisted by females as she goes about her business and the routine prayer sessions.

Kenya seemed ready for the optics as well. On hand to receive her at the airport were Kenyan Foreign Affairs Cabinet Secretary, Raychelle Omamo, and her Sports counterpart, Amina Mohamed.

Ms Mohamed, herself a veteran diplomat and former Cabinet Secretary for Foreign Affairs, had hand-delivered an invitation from President Kenyatta to Ms Suluhu last month. As she signed the visitors’ book at the Presidential Pavilion, she was surrounded by an all-female delegation of aides and officials from both governments. 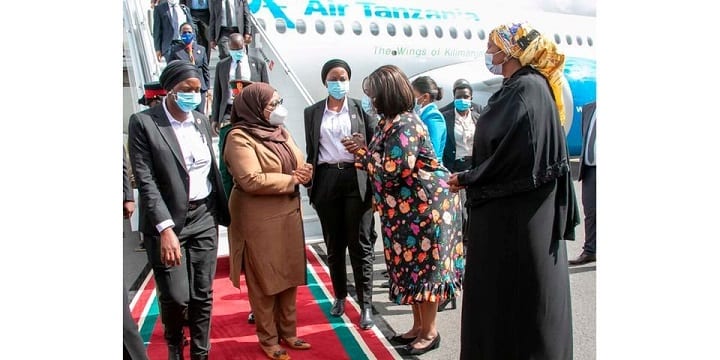 And in keeping with female etiquette, the dress she wore while arriving was not the one she appeared with at State House for the bilateral meeting. Perhaps each suit and hijab served an assigned occasion. There was an air of camaraderie at State House.

President Suluhu hasn’t been wearing masks at functions in Tanzania. Yesterday, as in her trip to Uganda last month, she wore one. Her delegation, too, was all in safety gear. It was no wonder that once she touched down in Nairobi, Dar es Salaam announced tougher measures on Covid-19 for visitors. From now on, proof of a negative test will be mandatory for those arriving or transiting through Tanzanian ports of entry.

Tanzania’s departure from international Covid-19 protocols had isolated the government of John Pombe Magufuli, who died on March 17. At State House in Nairobi, she was described as a sister and friend. She returned the favour, describing President Kenyatta as “my brother” and Kenyans as “siblings.”

“We are excited to welcome you here because we see you as our sister and Tanzania and Kenya are one thing,” President Kenyatta said.

“This time, we intend to go as far as strengthening our relations. My pledge is to continue working side by side with you to ensure the vision of our founding fathers is attained,” Presidents Kenyatta and Magufuli also fondly described each other as brothers.

President Magufuli even sent a pair of peacocks to Nairobi to symbolise their friendship and brotherhood.

President Kenyatta would later return gold plates confiscated from Tanzanian smugglers in Kenya. It seemed like pals working for a common cause. Until Covid-19 came. One side denied it, the other accepted it, and a wedge was drawn between neighbours. How will it go this time? Only time will tell.