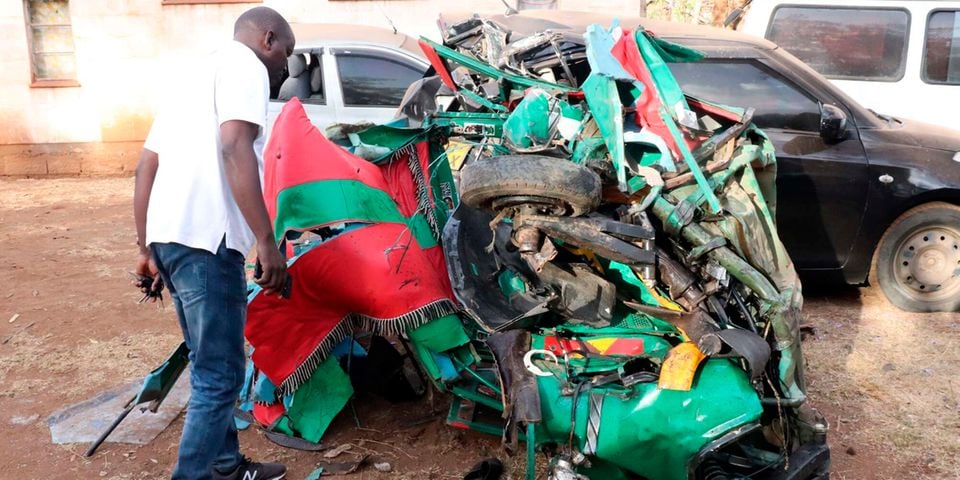 Three vehicles were involved in an accident that claimed the lives of six people early yesterday at a corner location not far from the Kamakis Eastern Bypass and the Thika Superhighway.

Eyewitness sources claim that a speeding Toyota Land Cruiser Prado struck a tuk tuk that was approaching the roadway from behind, which then struck a matatu parked by the wayside waiting to pick up passengers. Five people in the tuk-tuk, including the driver and one child, perished at the scene.

Mr Kairu, a boda-boda operator who was among the first people at the scene recounted: “I had just dropped a customer off in the area and I was on my way to pick another person when I heard a loud bang.”

“When I looked back I saw the tuktuk that I had left at the stage picking passengers, and a cloud of dust where the Prado had overturned and landed off the road.”

The Prado’s driver, who was allegedly intoxicated, managed to flee the scene with just minor wounds, and is currently being detained at the Ruiru Police Station.

According to a police report, he is anticipated to face charges for driving dangerously and causing death.

The suspected drunk driver was being beaten up by a bunch of onlookers when responding police arrived on the scene. The police dispersed the enraged crowd by requesting that they let the law to take its course and assuring them that due process would be adhered to.

READ ALSO  Why Kenya's ambassador to the UN is still trending more than a week after his speech
Related Topics:By-pass AccidentNews
Up Next