VIDEO: US-based Kenyan man sheds tears as he takes his grandmother on her first ever flight 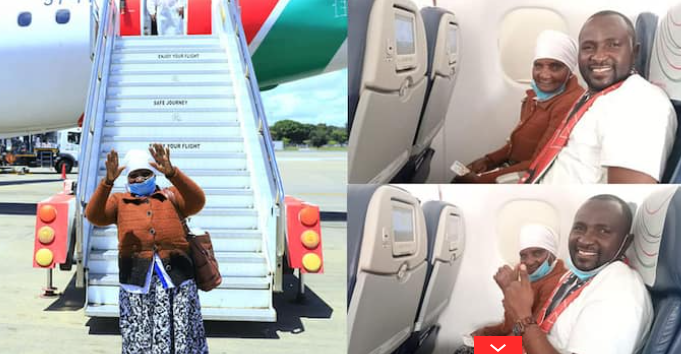 Jeremy Damaris captured the entire journey on his YouTube channel, from boarding a flight at Jomo Kenyatta International Airport (JKIA) to holidaying in Mombasa.

According to Jeremy, he did not inform her where they were headed. “She has no idea where I am taking her,” he said as they arrived at JKIA.

His grandma was quite excited about learning that they would board a flight and admitted she had never imagined she would ever do it.

Jeremy said her admission made him emotional. “I cried when my cucu told me she had never imagined that she will ever come close to an aeroplane.

She always see them in the sky,” he wrote on Facebook. The video he shared depicted them waking on the runway at JKIA before boarding a Kenya Airways plane. Inside the plane, Jeremy sat next to his grandmother, informing her about the different parts of an aeroplane.

His grandmother was seen animatedly talking during the flight as she enjoyed the spectacular views from the sky. They were accompanied on the trip by Jeremy’s mother and brother. Beach After landing in Mombasa, they headed to their hotel before later making their way to the beach.

Jeremy said his grandma saw the beach for the first time, and she was spotted wearing shorts.  They took a walk on the beach, but she declined to take a camel ride for fear of falling.

READ ALSO  My Story: I fell for a love con and this is what he taught me

The family then took a boat ride, and the grandmother seemed in high spirits. Jeremy urged Kenyans to appreciate their loved ones writing: “If you have your grandma or mother, give them this opportunity. Value them.

My grandmother is very happy that she was able to come and see this wonderful place.” Reactions Social media users hailed Jeremy for the move, writing: Mary Haley: “Beautiful.” Lucy Wahinya: “Ooh my, this is so beautiful.” Samuel Damaris: “Best feeling ever.

God bless you bro. May you never lack.” Subscribe to watch new videos Guardian cries A Ugandan man recently warmed the hearts of netizens after surprising his 74-year-old guardian with a flight to Nairobi.