VIDEO: Why Betty Kyallo and her sister Mercy are literally 'fighting over a man' 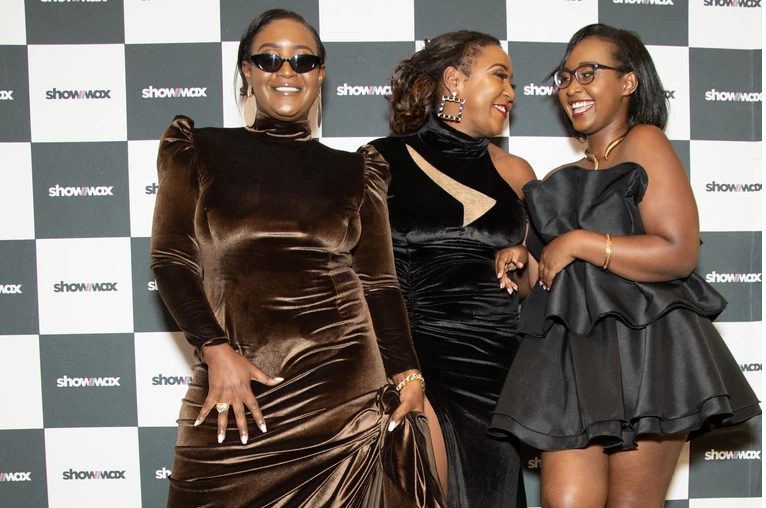 Last Thursday, media personality Betty Kyallo and her sisters Mercy Kyallo and Gloria Kyallo held an exclusive premiere of their reality series Kyallo Kulture at the Kempinski Hotel in Nairobi.

The series dives into the personal lives of Betty Kyallo, one of Kenya’s most prominent media personalities and a thriving entrepreneur and her siblings.

It  premiered on Showmax on 17th June 2022. The 13-part reality series will dive into the personal lives of Betty Kyallo, one of Kenya’s most prominent media personalities and a thriving entrepreneur, and her bold sisters, Mercy and Gloria Kyallo, like you’ve never seen before.

Watch as the ladies explain why they will be seen fighting over everything, including men.

Being modern, unapologetic and multifaceted, the three sisters will give us a glimpse into the joys and pains of sisterhood, whilst also sharing more about their love lives, parenting, growing into womanhood and taking charge of their businesses. “Gloria, Mercy, and Betty represent the urban Kenyan woman,” says Eugene Mbugua, the creator of the reality series. “They’re hard-working entrepreneurs, they like to have fun, and they are not in any way held back by what society thinks of them. They’re strong and unapologetic. These are the things that attracted our production company, D&R Studios, to them.”

Though Betty is the most popular of the three sisters, for Eugene, each one of them brings something unique to Kyallo Kulture that the audience will love. Each sister will share a key life story that they’ve never opened up about before. Stories are very personal to them, and that have made them who they are today; from Betty’s childhood accident to Mercy’s IVF experience to Gloria’s childhood growing up without a father and so much more.

Sol Family and This Love were among the ten most-watched shows on Showmax in Kenya in 2020 and 2021 respectively but Eugene says Kyallo Kulture’s major differentiator is that it is led by an all-female lead cast. The show has also been produced by a predominantly female crew. The show delves deep into matters that a lot of women (and by extension, men) will relate to and empathise with.

Betty, whose much-publicised marriage to fellow news anchor Dennis Okari ended after only six months, has attracted controversy about her dating life, while Mercy’s has been described as a mysterious mess.

And who is Gloria dating? All these questions are answered as the show takes a candid look at what an ideal relationship means for a Kyallo sister.

Episode 1 also exposes rifts between Betty and Mercy as Gloria seeks to distance herself from this conflict even as she’s taken down memory lane to their childhood home in Kahawa West.

Over the 13 weekly episodes, Kyallo Kulture will also explore tragic events like Betty’s accident that left her with a crooked smile and scars that impacted her confidence for years, as well as parenthood.

Here Betty opens up, for the very first time, what it means to be in the limelight while nursing a child in the ICU and so much more.

On the business front, we’ll get to see the sisters in their element as entrepreneurs, with Mercy who is the CEO of Yallo Leather taking us through the journey of setting up her own luxury leather bag business.

Betty also shares the true story behind her boutique salon, Flair by Betty, while also shedding more light on why her talk-of-the-town partnership with a friend ended with them as competitors in the same field.

The series will be airing on Showmax with new episodes releasing every Friday.

Photos captured at the launch of ‘Kyallo Kulture’