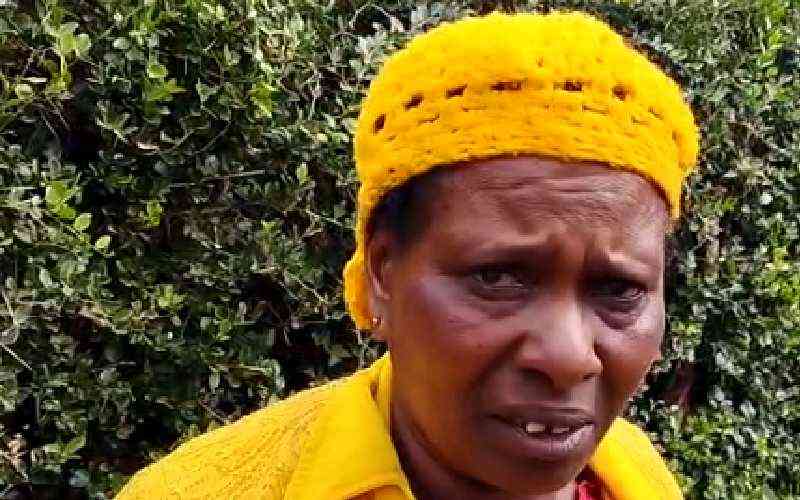 The woman who briefly stole the show on Tuesday when she interrupted President William Ruto as he started to address mourners during the burial service of Jack Reriani, the brother of Deputy President Rigathi Gachagua, has revealed what she wanted from the head of state.

Lucy Wangui Gichohi had attended the burial service with one mission –  to catch Ruto’s eye and plead with him to help her with Sh400, 000 to help her son who works as a tout at Nyeri town travel to the United States where her nephew works.

“He has a family of three, two children are in secondary school while one is in Primary. Life to my son has been a living hell. When his cousin got the opportunity to work as a casual labour, I vowed to help get him fare and money that would assist him to process the travel documents and the air ticket,” narrated Wangui.

Her only worry was how to get the attention of the Head of State.

Wangui disclosed she created a strategy that would not backfire and land her in trouble.

Wangui who hails from Tetu, about 70 kilometers away from Hiriga where the burial service was being conducted, slept at Ruringu village in the outskirts of Nyeri town before waking up at dawn to travel to Hiriga village.

She had heard on the radio that the President was to attend the burial service of his Deputy’s brother and all she needed was to be there in time.

“I arrived at the ceremony at 6am and secured a seat at the front row. I waited calmly for the opportunity to strike. I listened to the entertainers, then to the different speakers, to Gachagua’s speech and when Ruto rose, I knew it was my time.

“Immediately he urged mourners to sit. I stood and went towards him shouting that I needed his support and went ahead claiming that I needed the first lady to help me as the security officers approached me,’ recalled Wangui.

Wangui, who was strategically seated, was so near to the President that her voice was being picked by the microphones of the choir team who were in the front seat.

“I want help from the First lady, Rachel Ruto. These men will kill me, Mama Ruto should help me,” Wangui said while battling with the Presidential escort who tried removing her at the podium.

The President assured Wangui that the first lady would assist her even as the security officers removed her.

“I know how dangerous it is to interrupt the Head of State and I can easily lose my life but poverty has pushed me to do this for my son, I know the President for his generosity and I know he will assist my son get to America,” said Wangui.

Wangui said she is employed as a casual labourer at Chaka to take care of a 100-year woman who said life had become extremely hard for her to feed her family and that of her children prompting her to dare the devil.