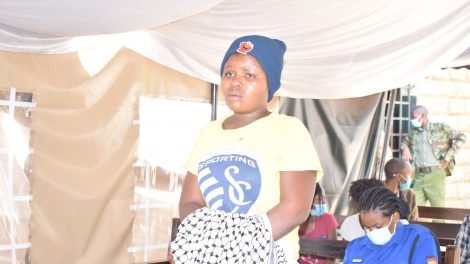 A woman who beat up her husband after he failed to pay rent has been found guilty of assault by a Makadara court.

Scholastica Akinyi Nyakech pleaded guilty to hitting and causing injuries to her husband Salim Obulo’s  face with a glass bottle.

She committed the offence inside their rented house in Shauri Moyo estate, in Kamukunji sub-county,  Nairobi on February 22. Nyakech admitted the charges before principal magistrate Eva Kanyiri.

The court heard that Nyakech had demanded rent money from Ombulo but he said he did not have it.

She picked the bottle and hit him on the left cheek. Nyakech admitted the facts of the case as read out to her by prosecution counsel Joseph Mburugu.

She claimed that her husband had a habit of battering her and bringing women to the house.

In one of the instances, she claimed to have left the house for an errand at 4am but after walking for a distance she felt it was too early and insecure and decided to return home only to find him with another woman.

She pleaded for leniency claiming she acted out of bouts of anger.

Kanyiri ordered for her social inquiry report to be tabled before her on Mach 5 before sentencing her.

READ ALSO  Who was this man, Bashir Mohamed?
Related Topics:NewsSalim ObuloScholastica Akinyi Nyakech
Up Next