VIDEO: You have no business telling me to resign, Ruto tells President Kenyatta 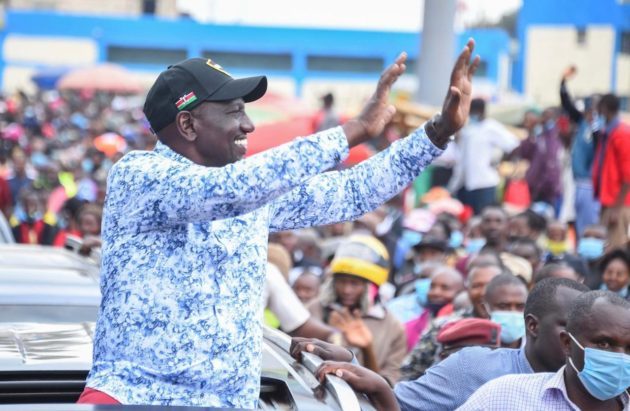 Kenya’s Deputy President William Ruto has declared he will not resign, a day after President Uhuru Kenyatta said it is tie he considered quitting instead of criticising the government from within.

“I will continue working as the Deputy President of Kenya, because that is my position under the Constitution,” Ruto declared at a rally in Isiolo for his hustler nation empowerment program.

He also sought to clarify that “There is absolutely no contest between my boss and I. I respect the decision of the His Excellency The President, and the President calls the shots, he is in charge and he takes all decisions and i have not countermanded any decision.

Ruto spoke a day after President Kenyatta criticised him for employing doublespeak on the Jubilee government’s development record.

“You can’t be speaking of the failures of a government where you serve while at the same time outlining what you refer to as we have achieved as a government. You better resign,” Kenyatta said when he addressed residents of Uthiru after commissioning a health centre put up by the Nairobi Metropolitan Services.

But Ruto has defended himself saying that he has always been respectful to the President even when he felt he was being undermined in the performance of his duty under the Constitution.

“I have never said anything against the President out of respect, even if the work I am mandated to be doing as a Deputy President is being done by others, I have also respected that decision, because I want unity in our nation of Kenya.”

When the president spoke in Uthiru on Friday, he accused Ruto of double speak for highlighting failures and successes of the government at the same time yet he serves in it.

“That is double speak, you can’t be speaking of the failures of a government where you serve while at the same time outlining what you refer to as we have achieved as a government. You better resign,” Kenyatta said when he addressed residents of Uthiru after commissioning a health centre put up by the Nairobi Metropolitan Sercices.

Kenyatta did not mention his Deputy’s name directly, but it was clear he was referring to him due to statements Ruto often makes on how Jubilee has developed roads, equipped hospitals among other projects while at the same time casting the government as lost on its priorities due to the introduction of the handshake politics.

Equally, whenever Ruto is castigating the BBI, he often refers to its proponents (Kenyatta and Odinga) with the pronoun “they”.

“They are telling us that BBI will improve the lives of Kenyans when we know that it is aimed at creating positions for them,” he said during one of his hustler nation empowerment programs recently.

Kenyatta reiterated the need to support the Building Bridges Initiative (BBI) saying it holds the key to more development in the country as well as end perennial chaos after elections.

While Kenyatta and his handshake partner former Prime Minister Raila Odinga are rallying for the support of the BBI, Ruto and his brigade of the hustler nation have dismissed it as a waste of public resources and only aimed at creating positions for select leaders. Kenyatta and Odinga have dismissed the claim.

Kenyatta last week held a meeting in his Mt Kenya backyard where he rallied local leaders to support the BBI initiative saying they stood to benefit contrary to claims by Ruto and his troops.

Odinga has also held a similar meeting in his Nyanza region, where he met elected leaders, business leaders among other influential businessmen and professionals to seek their support even as county assemblies countrywide race to debate the BBI Constitutional Ammendment Bill.

So far, three counties, Kisumu, Siaya and Homa Bay have passed the Bill.

On Thursday, there were chaos at the Baringo County Assembly where teargass was lobbed by police after the bill was shot down with 30 versus 11 votes.

While MCAs opposed to the Bill said it had been defeated, those supporting it said the vote was marred by irregularities and demanded a repeat.

The Bill has already been tabled in several other counties across the country, with public participation ongoing ahead of the vote.

Only half of the counties, 24, are required to pass the Bill for it to be sent to the National Assembly as the country gears up for a national referendum in June.