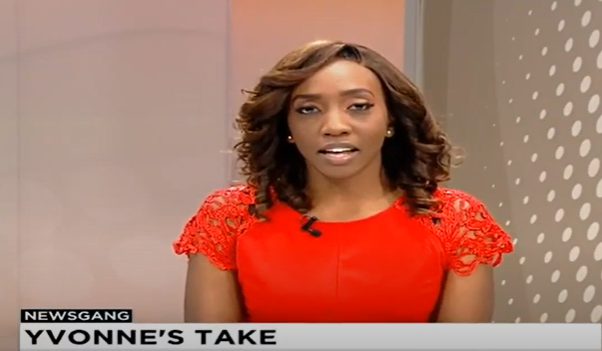 Yvonne Okwara Matole, Kenya’s Citizen TV‘s news anchor, on Thursday night chose The News Gang, a current affairs program, as the platform to address the East African nation’s leader Uhuru Kenyatta through what she referred to as to “an open letter to the president.”

And she was as daring as they come.

In her segment titled “Yvonne’s Take,” which was one of the four editorial-like monologues by the show’s panelists, she reminded Mr Kenyatta of the need to honor his promise and address the Pandora Papers expose.

According to a huge leak of financial papers, the Kenyatta family has secretly owned a network of offshore companies for decades.

The Pandora Papers – 12 million files – is the biggest such leak in history and Mr Kenyatta and six members of his family have been linked to 13 offshore companies.

Before he left for the Americas two weeks ago, he said he would “respond comprehensively” to the leak once he returned, adding that  that the investigation would “go a long way in enhancing the financial transparency and openness that we require in Kenya and around the globe.”

Yvonne was bunt, and suggested the kwy questions that Mr Kenyatta should address in order to calm those who feel that there is need for a thorough explanation. Watch:

The Kenyattas’ offshore investments, including a company with stocks and bonds worth $30m (£22m), were discovered among hundreds of thousands of pages of administrative paperwork from the archives of 14 law firms and service providers in Panama and the British Virgin Islands (BVI) and other tax havens.

Documents show that a foundation called Varies was set up in 2003 in Panama, naming Mr Kenyatta’s mother, Ngina, 88, as the first benefactor – and Kenya’s leader as the second benefactor, who would inherit it after her death.

The purpose of the foundation and the value of its assets are unknown.

According to BBC, Panamanian foundations are much sought after because the true owners of the assets are only known by their lawyers and they do not have to register their names with the Panamanian government, ICIJ reports.

The assets can also be designed to be transferred tax-free to a successor.

Media reports indicate that there’s no reliable estimate of the Kenyatta family’s net worth but its vast business interests span transport, insurance, hotels, farming, land ownership and the media industry in Kenya.

In 2018, Mr Kenyatta told the BBC Hardtalk programme that his family’s wealth was known to the public, and as president he had declared his assets as required by law.

“As I have always stated, what we own – what we have – is open to the public. As a public servant I’m supposed to make my wealth known and we declare every year,” Mr Kenyatta said.

“If there’s an instance where somebody can say that what we have done or obtained has not been legitimate, say so – we are ready to face any court,” he added.