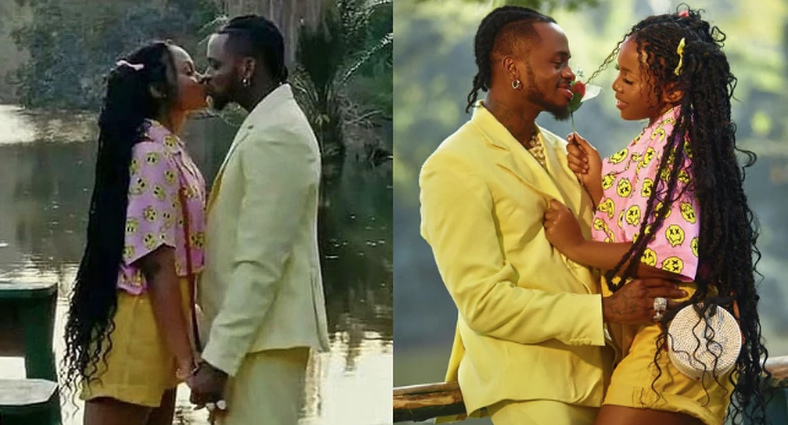 WCB Wasafi President Diamond Platinumz and budding musician Zuch  have continued to raise eyebrows on the status of their relationship after the release of Mtasubiri music video which has set the internet on fire.

In the romatically themed video, Zuchu is seen sharing a kiss with Diamond, something that has left many wondering if it’s a confirmation for a romantic relationship between the two.

“That is it. Tusubiri mimba sasa,” wrote Konga mbaga on Twitter.

Others thought it was just for fun.

“Give them a break. In any case, why don’t people just mind their business?” wonderd Kariuki Thathi.

The Mtasubiri video has set a new history in Chibu Dangote and Zuchu’s music career after clocking close to 4 million views four days after its release.

In the music video that was directed by Director Ivan, Zuchu is seen eloping from Church where she is a choir member after receiving Diamond’s phone call.

The Mtasubiri song is available in Chibu Dangote’s new EP First Of All (FOA, that was released on March 11, 2022.

“Imagine over 204K within an hour…..thank you for #Mtasubiri Video Love 🏆🧡. Track no. 4 on #FOAtheEP,” wrote Diamond Platnumz.

In the song, the two confess how they love each other – telling off critics that they are not going to breakup anytime soon.

Mtangoja sana,” sings Diamond and Zuchu in the song.

However, in a joint interview on Wasafi FM, the WCB President and his signee denied being in a romantic relationship.

According to the two, their relationship still remains that of a boss and his employee.

In a separate interview back in February 2022, the Sukari hit-maker again sought to clarify that she has never dated Diamond and he will always remain to be her boss.

“(Diamond is just my boss, not my boyfriend. He has always been that professional and we will keep it that way),” Zuchu said.