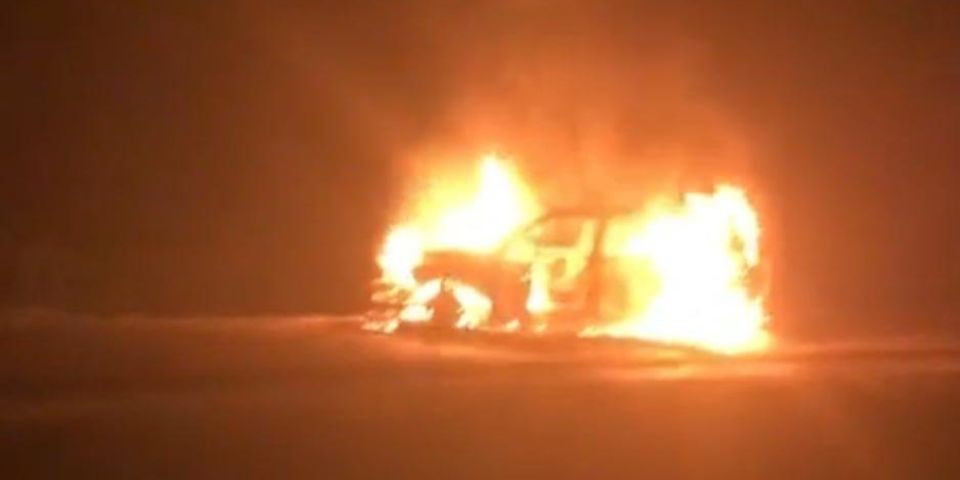 Kisii Deputy Governor Joash Maangi’s official vehicle was on Wednesday evening torched by an angry mob after it hit and killed a boda-boda rider and his passenger in Ololulung’a, Narok County.

The motorcyclist, Mr John Saanyo and his 8-year-old son, died on the spot after being knocked down by the governor’s vehicle.

The accident occurred at 6:30 pm at Tegero section of Narok- Bomet road as Mr Maangi, his driver, Stanley Gitonga, and two aides were headed to Nairobi from Kisii.

All the occupants of the vehicle escaped unhurt.

According to the Narok South Sub County Police Commander Chebe Kiambere the vehicle, a Toyota Prado, (registration number 45CG 028A) was heading towards Narok from Bomet.

She said the boda-boda rider was joining main the Narok-Bomet highway from a feeder road when he was knocked down by the said vehicle.

The deputy governor also confirmed that his vehicle was involved in a head-on-collision with the boda-boda.

“Unfortunately, we have lost two people in the accident. They burnt my vehicle when police tried to remove the two bodies from the scene,” said Mr Maangi in a phone interview with the Nation.

“Hundreds of unruly riders stormed the scene and set my vehicle on fire. We thank God that we are safe,” he said.

The bodies of the father and his son were later moved to Narok County and Referral Hospital.

By time of this story’s publication, Narok South Sub County Deputy Commissioner Felix Kisalu was still at the scene of the accident with efforts underway to tow the burnt vehicle.

The accident comes just two days after Maangi spent a night in police cells for reportedly mobilising youths to cause violence during former Cabinet Minister’s burial Simeon Nyachae on Monday.