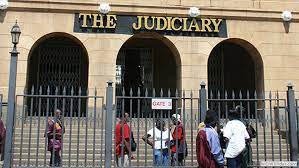 A voter has filed a case against the Orange Democratic Movement, Ethics and Anti-Corruption Commission, and one David Mberia who was declared the winner of the Karen Ward, Nairobi County ODM nominations.

According to Martin Chege Irungu, there are integrity issues surrounding the person of David Mberia.

The voter who challenged the process at the Milimani Law courts is also citing massive irregularities in the ODM party primaries for Karen Ward.

The case is scheduled for Thursday 5th May 2022.

READ ALSO  Sarah Kabu: Its not easy being a side chic
Related Topics:News
Up Next