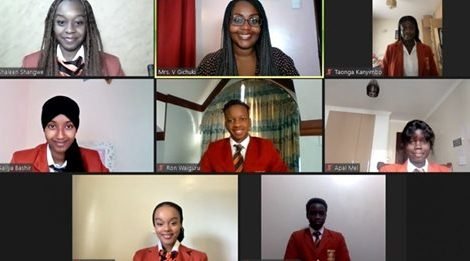 Kirinyaga Governor Ann Waiguru’s son, Roy, is among students from Brookhouse International School who won a scholarship following an“outstanding” performance in a competition hosted by a Scottish University.

Pupils from schools in Ghana, Kenya, Nigeria, Uganda, and Zimbabwe participated in the University of Dundee’s African Schools Mooting Competition 2021.

The competition saw 13 teams make a case against an opposing counsel and before two judges.

They were asked to make submissions in a fictitious civil law appeal before the United Kingdom Supreme Court, with the team from Brookhouse School, Nairobi, Kenya, declared winners after performances of the highest standard.

Each member of the winning team received a £100 voucher and a scholarship of £5,000 per annum should they apply and be accepted to one of Dundee’s LLB programmes.

The Governor took to her social media to congratulatory her son and his schoolmate for the good performance.

She further cheekily warned some of the best lawyers in the country including Fred Ngatia, Ahmednasir Abdullahi, and Donald B.Kipkorir to watch out for Roy as he was the future in the legal industry

“So proud of my son Ron and his Brookhouse school teammates for the outstanding performance at African Schools Mooting Competition 2021, for both winning first position in Africa and £5000 p.a. partial law scholarship. Fred Ngatia, Ahmednasir Abdullahi Donald B. Kipkorir watch out … the future is here!” she wrote.

READ ALSO  She gave her ex-lover a second chance, but paid with her life
Related Topics:News
Up Next

VIDEO: How Covid-19 ailing Sen Wako was rushed to his home in an ambulance and then back to the Hospital