VIDEO: Why Wajackoyah is giving Ruto, Raila sleepless nights, could force a run-off 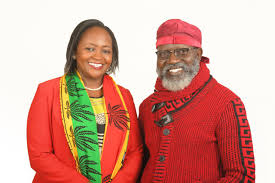 Professor George Luchiri Wajackoyah has been trending at number one for three days running since he appeared on JKL on Citizen TV on Wednesday.

Why, you may ask?

His message is resonating with young people more than ever before. Speaking to Citizen TV’s Trevor Ombija, Wajackoya laid out his vision for Kenya, especially highlighting how he would promote Cannabis and snake venom production as an economic panacea.

According to political analyst Herman Manyora, the man has become so popular over with snake venom and cannabis production vision that it should worry the main presidential contenders – DP William Ruto and Former PM Raila Odinga.

“At this rate, Wajackoyah might force a run-off and this is not good for the two, especially DP Ruto,” he says.

And even before the interview where he was flanked by his running mate Justina Wambui Wamae, Wajackoyah had become something of a social media sensation after announcing that if elected the fifth president of the Republic of Kenya, he would legalize the use of marijuana, and pay off all Kenya international debts.

Wajakoyah, who has since been cleared by the electoral commission IEBC to vie for the presidency in the August elections, also promised to create employment by allowing the sale of marijuana both locally and internationally.

The criminal lawyer has run an unconventional presidential campaign complete with the most unusual. Comical theatrics that include dancing to reggae music, sometimes while clad in Rastafari attire and wearing headgear which he often says brings freshness and youthfulness to the fore.

The 61-year-old professor was born in Matungu in the western part of Kenya. Unfortunately, his parents divorced and abandoned him at the age of three. Frustrated and in a quest to find his mother, Wajackoyah went to Busia, with an aim of travelling to Uganda, where it was claimed that she had moved to.

But he was unsuccessful in his bid to reunite with his mother. He met many challenges along the way. But he also met strangers who were willing to give him a helping hand.

With nowhere to go, Wajackoyah moved to Nairobi where he spent years on the streets of Nairobi, roaming around with other boys who were also homeless before a well-wisher rescued him.

He was lucky when the then Education Minister, the late Joseph Kamotho, was informed of his plight and helped pay his school fees at St. Peter’s Mumias Boys High School for his A-levels.

Wajackoyah then got the chance to study Law at the University of Wolverhampton in the United Kingdom where he graduated in 1996.

He has also taught law and economics, human rights, and comparative constitutional and international law at US, UK and Kenyan universities.

Wajackoyah is the founding partner of Luchiri & Co Advocates and has practised law for at least 25 years.

Like his campaign, Wajackoyah’s post-election plans are equally unconventional. If elected president, the lawyer is pledging to create eight prime minister positions in his government, suspend the constitution for six months, change working days to Monday through Thursday,  and clear Kenya’s loans through sale of marijuana.

Wajackoyah, who is running on a Roots Party ticket has named Justina Wambui Wamae as his running mate.

“I was looking at search data today and according Google Search Trends popularity, Wajackoyah is now arguably as popular as Raila and Ruto and he has been able to achieve this in less than a week. Twitter trends data also indicates that his popularity is surpassing that of the two other candidates. Personally, I think Wajackoyah will win this presidential race if there’s no corruption involved or if Deep State decides to support his bid hata chini ya maji,” wrote a fan.

Ngilu in a statement on Twitter says Wajackoyah has brought a new reality to Kenya Kwanza’s owing to his approach and manifesto.

According to her, Ruto’s team is losing strongholds as Wajackoyah is now taking dominance in age groups they previously claimed to have had great support.

“It’s not so much the Azimio surge & consolidation of key bases. It’s also the rapid momentum with which Kenya Kwisha are ceding ground they previously comfortably occupied like Mt Kenya,” Ngilu tweeted.

“Even Wajackoya is now threatening their assumed key demographic of 18-30 and partakers of weed,” she added.

This follows a recent survey by InfoTrak that placed Azimio-one Kenya coalition presidential flag bearer Raila Odinga ahead of his Kenya Kwanza counterpart William Ruto with a 4 per cent difference.

In the data released on Wednesday, June 8, 2022, Raila led with 42 per cent in popularity with Ruto coming second with 38 per cent.

The polling firm says the ODM leader would garner 9.3 million votes and Ruto 8.4 million votes. None of the candidates would meet the ‘fifty-plus one’ constitutional requirement.

The firm, while referring to previous polls, said Ruto dropped in popularity after naming Rigathi Gachagua as his running mate, while Raila maintained his 42 per cent.

But it seems things have changed rapidly with the entry of Wajackoyah.