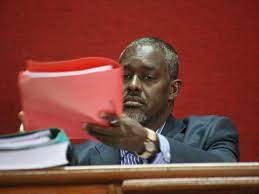 As we start to cross-check members of the JSC, today we start with Judg Judge Mohamed Warsame to find out why he was not sworn in by President Uhuru Kenyatta to the JSC in 2018.

“The President is normally guided by the intelligence report among other issues, maybe had a negative report concerning judge Warsame you never know,” said Abraham Kusienya, a law expert.

Kusienya said that President Uhuru’s blatant refusal to swear in the judge is not something Kenyans can take it lightly.

He said that it’s either the NIS gave him an integrity report or he simply had some personal differences with President Uhuru Kenyatta.

“Who knows, maybe he had received a corruption report or another thing on the judge or they had some personal differences, the President can not just wake up and refuse a name,” he added.

On a positive note, Mr.Warsame is a family man with no dramas.

He currently sits at the JSC and is interviewing the shortlisted members seeking to be high court and court of appeal judges.

Warsame’s stand-off with the President occurred in 2018 after he was elected to the JSC by a court of appeal judge.

Uhuru’s stance was met with resistance by both the KMJA and the LSK.

LSK moved to the high court to see orders that prevented the parliament from vetting him as proposed.

He later assumed the JSC role after a court order, let’s check Judge Majanja, Olwande in our weekly cross-check.