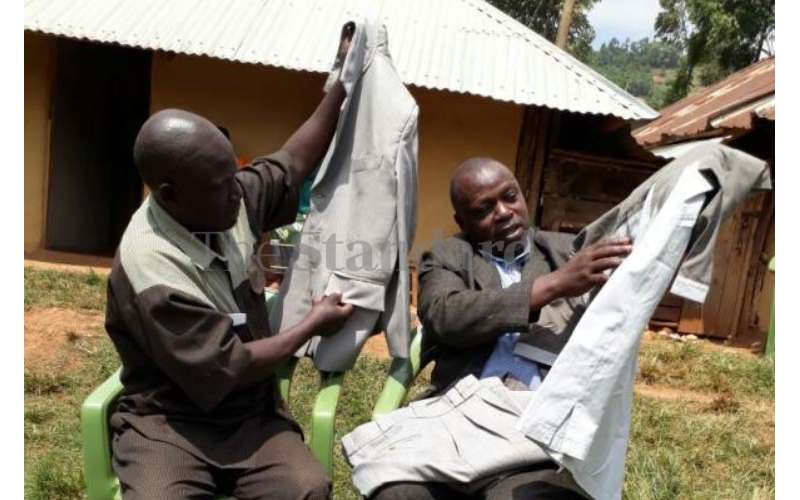 From longing for a tasty home-cooked meal during their long incarceration, freedom comes with confusion, as they attempt to fit into a world that moved on while they were locked away.

Some released through the presidential power of mercy or after years of a gruelling justice appeal system, the convicts walk out of their cells filled with anxiety, excitement, and fear of what awaits them outside the huge metallic gates at the prisons.

For instance, former councillor Stata Choi, 66, could not believe his eyes when he set foot in Kisii town after spending 22 years in prison. What he left as a typical rural town had made strides, making it unrecognisable.

Choi was surprised at the growth of the town and the technological advancement that had taken place in his absence. He could hardly pick his way through the now crowded streets. At the town, he could gaze at the many-storey buildings with a bewildered expression.

The former jailbird was also surprised that, unlike the time he was arrested, everyone he met along the streets had a mobile phone.

Choi and his younger brother Francis Chweya Keronche, 56, were arrested in May 1993 over the killing of their stepmother, who was lynched by a mob at their home in Botabori Rianyamari village over claims of witchcraft.

He was barely five months in office as the councillor for Boikang’a East Ward in South Mugirango Constituency when they were arrested, charged, and sentenced to death two years later by the then Kisii High Court Judge Tom Mbaluto.

“When we were sentenced to death in 1995 after spending two years in prison remand, I didn’t know anyone with a mobile phone in their pocket. There was no Probox or Boda boda all over like it is now. I experienced a culture shock when I arrived home,” said Choi.

Choi and Chweya’s death sentences were commuted to life sentences in 2003, and eventually they were released through a presidential pardon in July 2014 following recommendations made by the Power of Mercy Advisory Committee, which said they had become good citizens.

“When I was a councillor we used to travel to Kisii Town to make calls at the Kenya Post and Telecommunication Cooperation offices. I was surprised that everybody, including school children, had mobile phones that they carry and can make calls to anyone at any time,” said Choi.

Choi, who was only 38 at the time of his jailing, and his brother Chweya, then 28, maintain their innocence, saying they suffered for a crime they never committed. They are, however grateful to God for letting them come out of jail alive. They have also forgiven those who they say framed them.

The brothers say their productive years were rendered useless in the long period they remained behind bars, and picking up pieces of the broken lives has not been easy.

The former councillor believes he could have graduated to be a Member of County Assembly had his life not taken a tumble. He recalled how the appeal was rejected by appellate judges Samuel Bosire, Philip Tunoi, and Richard Kwach.

Choi had just won the 1992 first multiparty election with a landslide, with the ruling party Kanu candidate getting 1,924 votes against his six competitors, and was looking forward to a rewarding political career.

“I am appealing to the government to help me get my five years’ salary as a councillor since my seat was not declared vacant and no by-election was held, meaning that my salary is still held up somewhere. I need the money to restart my life,” said Choi.

He said the most painful part of his jail term was that his grandmother, mother, and daughter died on diverse dates while he was away and that he could not attend their funerals. He only learnt of their death when relatives visited him in prison.

Chweya said members of their extended family received them well and helped them to reintegrate and that they were still trying to catch up with what they lost during the 22 years they were incarcerated. Their wives and children, they said, have been very supportive.

Chweya said the two of them were now accomplished carpenters, a trade they learnt in prison. They were part of a team that made some of the best furniture, some used in Parliament. However, Chweya said they did not get a penny for their good skills.

He said his elder brother was also a good tailor who could make very good suits, asking the government to consider the good work they did while in prison by assisting them to get carpentry tools and sewing machines so they could take care of their families.

The two brothers are very grateful to their wives for having held their families together for the more than 20 years they were away, given that they were not expecting to be out since they had been sentenced to death in 1995, with their appeal being rejected in 1997.

Samson Otieno, a father of six, feels like he is still held behind bars. Even after his release from the physical prison, Otieno, a former manager in one of the leading production companies in Nakuru, is still in an emotional jail after losing his mother, family, and property.

On May 19, 2015, Otieno was arrested while visiting his daughter in school, a day after he had buried his nephew in Nairobi.

The 41-year-old was taken to Bahati police station in Nakuru County, where he was notified that he would be charged with incest for defiling his two daughters aged nine and seven.

The charge indicated that he defiled his elder daughter on diverse dates between 2014 and 2015. He was said to have defiled the younger one on May 18, 2015. On October 26, 2016, Otieno was convicted and sentenced to life for incest.

His two wives and two sons’ testimonies, which defended him, were not enough to save him from jail.

Aggrieved by the sentence, he appeared before the High Court. The appeal took four years to conclude while he waited in prison.

On June 12, 2020, Justice Teresia Matheka set aside the sentences and ordered that he be released. Ms Matheka ruled that Otieno’s conviction did not meet the required threshold, making it unsafe.

She said all the testimonies relied on by prosecution and the trial court were inconsistent and contradictory. She ruled that the defilement case was never investigated to its conclusion.

The judge said the minor aged nine, who testified twice, gave two different accounts of the incident, thereby contradicting herself.

Otieno’s celebration of his release was, however, cut short as his 69-year-old mother Felister Awino died days before his release.

The pain in knowing that his mother died thinking he had molested his children still haunts Otieno 10 months after tasting freedom. “My mother died knowing that I molested my children. She never got the opportunity to witness my innocence proven,” he said.

After Otieno’s imprisonment, his two daughters from the first wife dropped out of school and got married. His younger wife remarried.

“I am confused, angry, disappointed, and hurt. My family believed I would spend the rest of my life in jail and moved on, leading separate lives,” he said.

His children were also taken to juvenile homes, where they stayed until January 2020, when they were reunited with their mother.