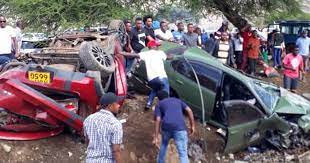 The Road Safety Association of Kenya has raised a red flag on the increasing number of deaths on Kenyan roads and called upon government agencies to curb the carnage as National Transport and Safety Authority (NTSA) reports a 9.3% death surge resulting from road accidents.

David Kiarie is the Chairman of RSAK and he says date more than two thousand people have perished in road accidents since January to date.

The Road Safety Association of Kenya says the police should take the Implementation and enforcement of traffic rules seriously.

“The police ought to move with speed and curb this menace. The policies and regulations are in place what is lacking is implementation. It’s so pathetic that at the moment we have lost the over 2,000 people so far and yet this is not the festive period when we usually experience high casualties,” Kiarie said

The association is also calling for a probe on the issuance of digital driving licenses claiming that the award and subsequent renewal of the contract are shrouded in mystery.

He called for caution on our roads, especially during this electioneering period in a bid to save lives calling agencies tasked with ensuring road safety to work in tandem.