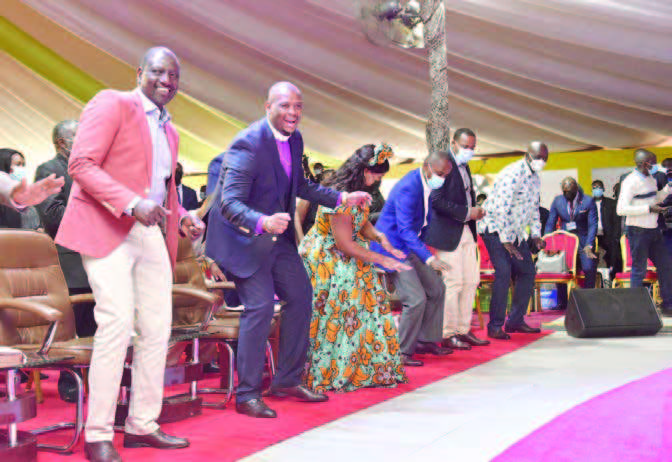 Deputy President William Ruto yesterday told off his critics on church donations, stating that would not stop the practice but instead look forward to dishing out billions of shillings.

Ruto said it has taken the hand of God for him to achieve what he has and therefore he would not slow down on his contributions to the church.

“We are looking forward to the day when we will not be taking thousands or millions but billions of shillings to church,” Ruto told a congregation at a Kiambu church.

“We did not have godfathers, we only had God the Father. Please understand us and allow us to worship God the way we feel we should,” he told the cheering congregants. Opposition chief Raila Odinga has repeatedly chided Ruto for using churches to “launder” his alleged ill-gotten wealth. According to Raila, the DP uses stolen money to coerce and “bribe” some churches to invite him to advance his political ambition.

Raila claims that Ruto’s funds-drives are a major corruption scheme that church leaders should not entertain.

“He asks the church to invite him by using the same money he gives those churches for harambees. Not that the church invites him willingly,” Raila alleged recently.

Speaking yesterday at the New Breed City Chapel in Kiambu, the DP said he has been accused of many things and some people do not like the way he worships.

“Some have a problem about how often we go to church while others have accused us of carrying money to church but we will not stop,” Ruto maintained.

The DP said he was giving to the church to reciprocate what God has done for him, adding that were it not for God he would not be where he is today. He asked his critics to allow him to worship God the way he feels right, saying as a Christian he un derstands the need to give. “We did not have godfathers. We only had God the father. Please understand us and allow us to worship God the way we feel we should,” said the DP.

Related Topics:NewsWilliam Ruto
Up Next