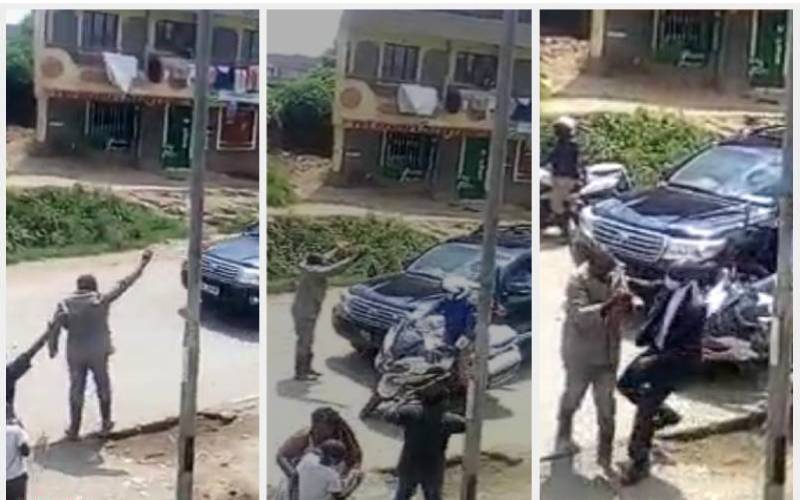 On Wednesday, a middle-aged man caused a stir in Lucky Summer, Nairobi when he sprang onto the road and temporarily blocked President Uhuru Kenyatta’s motorcade.

The President was on his way to preside over the official launch of ultra-modern Neema slaughterhouse in Lucky Summer.

While en route, the middle-aged man, who was on the roadside waving as Kenyatta’s outriders zoomed past him, gathered an anomalous courage and sprang onto the road, right when the Head of State’s vehicle was about to move past that location.

With no other route left for him, the President’s driver stopped.

However, before the man could deliver his message to Kenyatta, a bodyguard, who was in one of the chase cars, a Toyota Land Cruiser Prado, bolted out of the vehicle, charged at the man, grabbed him by the neck and pushed him out of the road.

A uniformed police officer at the scene, thereafter, took control of the situation, restricting the unidentified man to the roadside.

The 1-minute-and-51-second video ends by showing the President’s complete motorcade zooming past a few onlookers, who were screaming in excitement.

The video-taped incident, expectedly, found its way to micro-blogging site, Twitter, where a section of users called out police and the President’s security detail for laxity.

A Twitter user, who goes by the name Wanjiku Revolution, remarked: “This security is lax! What if that guy had a suicide vest!” The post was retweeted at least 80 times in one hour.

Speaking to The Standard about that incident, Nairobi County Regional Commander, Augustine Nthumbi, said the unarmed middle-aged man was “only excited” to see the President’s convoy.

“What the man did does not conclusively amount to breach of the President’s security,” said Nthumbi.

“To avert such an occurrence in the future, we, in the senior management of the police service, will be asking leaders to sensitise their constituents ahead of visits by VVIPs such as the President. We’ll also ask police officers deployed to areas where the President is visiting to be more vigilant,” said Nthumbi.

President Kenyatta on Wednesday, May 26 launched the ultra-modern Neema abattoir.