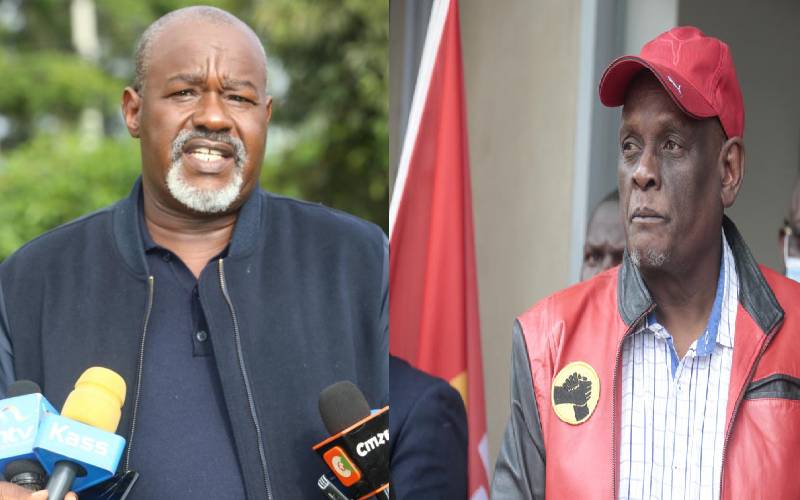 Speaking on KTN News’ Cross Fire show on Thursday, Murathe said DP Ruto and all Jubilee MPs campaigning for UDA candidates in the forthcoming by-elections will be removed from the party.

Murathe accused Tanga Tanga leaders of provoking President Uhuru by persistently campaigning in Mt Kenya region even after he (the President) expressed reservations against the political activities.

He told them to take their wheelbarrows and donations to other parts of the country if they were genuine.

“I wonder if it is only Mt Kenya region that needs wheelbarrows, harambees and these donations, let them take them to other parts of the counties,” said Murathe.

Murathe had an exchange with deputy party secretary-general Caleb Kositanyi over a wide range of issues ranging from the Building Bridges Initiative (BBI) to the imminent by-elections.

He warned Kositany and other party rebels of ouster when its National Management Committee (NMC) meets early next week.

He told the Soi MP that he and other Tanga tanga MPs campaigning for UDA candidates in imminent by-elections will be expelled from the party.

“I am putting Kositany on notice that when NMC meets on Monday, we will remove you from the party,” Murathe told Kositany.

He said it was unlawful for the Tanga Tanga MPs to propagate the interest of another party and still claim to be in Jubilee.

Kositany, however, dared Murathe to make good his threat and remove them, saying he had frustrated them enough.

Kositany also made it public that he will not run on a Jubilee ticket in the 2022 General Election and instead will use UDA without mentioning whether Deputy President William Ruto will use the same to run for President.

“I do not know the party the DP will use in 2022, but I will be seeking re-election on the UDA ticket,” he said.

The Soi MP told the Kieleweke side of Jubilee not to celebrate the passage of the Constitutional of Kenya (Amendment) Bill, 2020, adding that the process is not through.

Kositany claimed the bill was passed by a majority of county assemblies after the state threatened MCAs to pass the Building Bridges Initiative proposal.

“So people should stop celebrating as if Kenyans have endorsed the bill at the ballot, Kenyans could still reject the Bill at the referendum.”

He cited the Baringo County Assembly where the MCAs who voted No were all summoned by EACC, adding that it was a threat to other MCAs across the country.

Kositany said apart from expanding the executive, the other things don’t need a referendum, adding that the referendum is unnecessary.

According to a statement signed by Party Secretary-General Raphael Tuju, the six had appeared before the disciplinary committee last year and this year over insubordination and gross misconduct.

“The NMC in exercising its mandate as provided for under Article 7(2a) of the party constitution and relying on other enabling provisions of the same constitution has expelled the senators,” read the statement seen by Standard Digital.

The expulsion was however suspended by the Political Parties Disputes Tribunal.

The tribunal restrained the Registrar of Political Parties from removing the name of the senators from the membership of Jubilee Party pending hearing and determination of the case.

Related Topics:David MuratheNews
Up Next