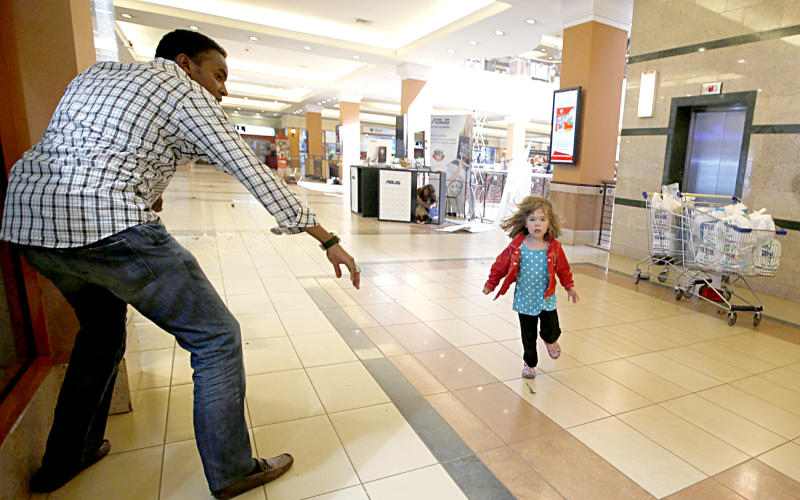 When he risked his life by walking into Westgate Mall in Westlands, Nairobi, in the middle of an attack by Al-Shabaab in 2013, little did Abdikadir Haji, popularly known as Abdul Haji, know his act of valour would come to change his life.

A photo of the father of four daughters wielding a pistol as he helped rescue hostages not only earned him a presidential commendation, but has also paid off politically after he was elected the Garissa County’s  senator, and was sworn in on Tuesday.

Abdulkadir Mohamed Haji has been sworn in as the Senator for Garissa county.

He replaces his father, the late Yusuf Haji, who died on February 13 at the Aga Khan Hospital, Nairobi where he had been undergoing treatment.

The Independent Electoral and Boundaries Commission declared Haji as the Garissa senator on April 6.

The elders argued that Abdul Haji was the bravest among probable candidates for the seat that fell vacant following the death of his father, Senator Yusuf Haji, at the Aga Khan University Hospital, Nairobi, on February 15.

Nomination papers deadline
The Independent Electoral and Boundaries Commission (IEBC) declared Mr Haji the winner as no one else had submitted nomination papers by Wednesday’s deadline (March 30, 2021). The Garissa senatorial by-election had been scheduled for Tuesday, May 18.

“After receiving the nomination papers from only one aspirant, I have forwarded the information to IEBC headquarters for the commission to make a determination,” Garissa County IEBC Returning Officer Hussein Gure told Nation.Africa Wednesday.

Mr Gure said that he had finalised his work as a returning officer as there is no election when a candidate has no opponents.

Following the death of his father Moses Mudavadi – a former powerful Cabinet minister in the late President Daniel Moi’s government – in 1989, Mr Mudavadi was elected unopposed for the Sabatia parliamentary seat to succeed his father.

In 2014, Mr Kuria also went to parliament unopposed when his main challenger, Mr Kiarie Kamere of the New Democrats Party, quit the race for the Gatundu South parliamentary by-election in 2014. The by-election was occasioned by the death of former MP Joseph Ngugi Nyumu.

Elders’ support
In a county where clan politics holds the key to power, Mr Haji managed to secure the support of all the major elders from the main clans in Garissa.

On Tuesday, the son of the late Senator Haji hosted ‘Samawadhal Sagaales’, respected traditional elders, at his residence in Garissa.

“Clan elders play an integral role in fostering unity and cohesion among the communities. It’s a pleasure to have taken a keen consideration of the blessings, wisdom and the experiences of the elders,” the senator-elect said after the meeting with the clan elders.

Mr Haji received the endorsement of the Abduwak, Aulihan and Abdalla clans, which recommended that he should succeed his father as senator. The three clans hold much sway in Garissa politics.

Mr Haji was cleared on Tuesday to run for the seat after he presented his Jubilee Party nomination papers to IEBC County Returning Officer Hussein Gure at the North Eastern National Polytechnic College.

READ ALSO  Picking up the pieces: The heavy price I paid for my addiction to alcohol

Before that, he had secured the support of ODM party after holding a meeting with ODM Deputy Party leader Hassan Joho and Deputy President William Ruto, and the latter pledged the support of the “Hustler Movement”.

Westgate terror attack
Mr Haji, a businessman, first came into the national limelight during the Westgate terror attack in 2013, when he stormed the mall to rescue his elder brother, Noordin Haji, now the Director of Public Prosecutions, who was holed up in the besieged mall.

The businessman, who grew up shooting at the Athi River range, rescued many hostages and was among the key heroes from the tragedy.

Mr Haji, another unidentified man and three policemen, one of them armed with an Ak-47 rifle, entered the mall and rescued terrified people hiding in Java Restaurant. He was among the first responders to the tragedy.

In the recent Msambweni by-election, independent candidate Feisal Bader, a nephew of the area’s late MP – Suleiman Dori – was voted in to succeed him.

And in the Bonchari by-election, the United Democratic Alliance (UDA) party – a political outfit associated with DP Ruto – has fronted Ms Teresa Bitutu, wife of the area’s late MP John Oyioka, to succeed him in the mini election scheduled for May 18.

The late Bomet governor Joyce Laboso succeeded her sister Lorna Laboso as Sotik MP in 2008, following the death of the latter in a plane crash.

In Homa Bay County, Senator Moses Kajwang also won the endorsement of the ODM party to succeed his brother Otieno Kajwang, who died after a short illness in 2014.

And in Kitui, Edith Nyenze, wife of former Kitui West MP Francis Nyenze, was elected to succeed his husband after he died of cancer at the age of 60 in 2017.

Vihiga Senator George Khaniri was also picked in 1996 by President Moi to succeed his father as the MP for Hamisi Constituency.

In Kibra, Imran Okoth inherited the Kibra parliamentary seat following the death of his brother Ken, in yet another case of keeping political power within the family.