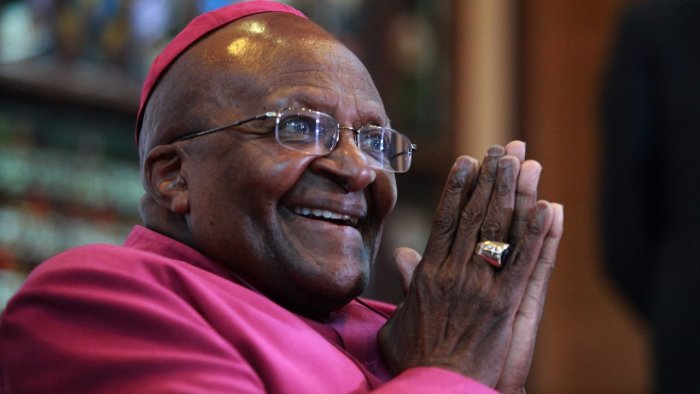 Desmond Mpilo Tutu (OMSG CH) was a South African Anglican bishop and theologian, known for his work as an anti-apartheid and human rights activist. He was the Bishop of Johannesburg from 1985 to 1986 and then the Archbishop of Cape Town from 1986 to 1996, in both cases being the first black African to hold the position. He died Sunday at the age of 90.

Tributes have been paid to the Nobel Peace Prize laureate  following his demise.

In 1997 Tutu is diagnosed with prostate cancer. He has since been hospitalised to treat recurring infections.

The cleric, who helped end apartheid in South Africa, retired from the church in 1996 to focus solely on the national reconciliation commission. which was formed earlier on.

He continued his activism, advocating for equality and reconciliation and is later named Archbishop Emeritus.

In a message of condolence to President Cyril Ramaphosa, the People of the Republic of South Africa, and the family of the departed Nobel Laureate, President Kenyatta mourned the ever-smiling Archbishop Desmond Tutu as an African icon of freedom, peace and reconciliation.

“The passing away of Archbishop Desmond Tutu is a big blow not only to the Republic of South Africa where he leaves behind huge footprints as an anti-apartheid hero but to the entire African continent where he is deeply respected and celebrated as a peacemaker.

“Through his distinguished work over the years as a cleric, freedom fighter and peacemaker, Archbishop Tutu inspired a generation of African leaders who embraced his non-violent approaches in the liberation struggle,” President Kenyatta mourned the former head of the South African Anglican Church.

Piyushi Kotecha, chief executive of the Desmond and Leah Tutu Legacy Foundation, and chairman Niclas Kjellstrom-Matseke said in a statement that Tutu was “a living embodiment of faith in action”.

In a statement on the foundation’s website, they added he spoke “boldly against racism, injustice, corruption and oppression, not just in apartheid South Africa but wherever in the world he saw wrongdoing, especially when it impacted the most vulnerable and voiceless in society.”

President Kenyatta wished President Cyril Ramaphosa, South Africans and the family of the departed prelate God’s comfort as they come to terms with his demise.

“To my brother President Cyril Ramaphosa, the People of the Republic of South Africa and the family, friends and relatives of Archbishop Tutu, I pray to God to cover you all with his calming fortitude during this difficult period of mourning,” President Kenyatta condoled.

Born in 1931, Archbishop Desmond Mpilo Tutu was a long-serving Anglican Church cleric and anti-apartheid campaigner who won the Nobel Peace Prize in 1984 and was later appointed to chair his country’s post-apartheid Truth and Reconciliation Commission.

VIDEO: My Kenyan husband married another woman while I was in the US for 19 years, I was later deported – Makena