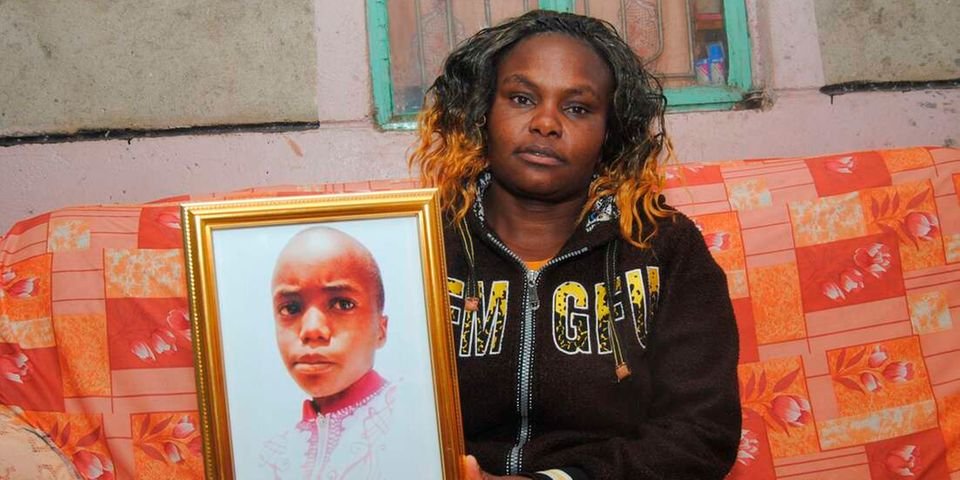 Nothing prepared Pastor Wilson Mwaura for the death of his third born child — by suicide.

A day before the body of Brian Mburu, 11, was found dangling from the roof of their home, father and son had had dinner together and shared light moments before retiring to bed.

In the morning, Brian woke up as usual, prepared himself for school and left.

Later in the day, he was found dead, leaving the family with countless questions.

“They say parents must observe changes in their children’s behaviours and moods, but for Brian, there was really no indication that he had issues. He left me with countless questions which to date, I have never really found answers to,” Pastor Mwaura says.

The man of God says he has not come to terms with the suicide of his son, and that the event has caused him anxiety and changed how he interacts with people.

Brian, he says, loved gymnastics, watching cartoons and movies, especially horror and action movies, which his father says, contained a lot of violence. He was also friendly, humble and hardworking.

“Since such movies were his favourites; he watched them with his siblings and sometimes alone. We are not really certain that they influenced him into taking his own life, but at this point, we are just looking at all the possibilities because he had a comfortable life at home and he did not exhibit signs of stress,” Mwaura says, adding that from the postmortem, they are convinced that the boy took his own life and there was no foul play.

His wife Purity Njoki says the family has been deeply affected because the suicide came barely five months after Brian’s cousin, Mary Njoki, 17, who was a Form Three student, also died by suicide.

“The incident shocked us. The girl had been sent home to bring school fees balance, which her father did not have at that point, and promised to look for it and pay in a few days,” says Njoki.

On the day the child arrived home, she looked happy and jovial as she spent time with her friends and age mates in the neighbourhood.

“When the suicide happened, so many theories came out but we have never really known what triggered it because she left no suicide note,” says Njoki.

The girl’s father, Francis Ngumi, a single parent of four children, says he has never come to terms with the death of his daughter.

“It was painful to lose my only daughter. She was a hardworking girl who was loved by all. It has not been easy bringing up these children on my own,” says Ngumi.

In November 2020, another child died by suicide in Kasarani slums, Elburgon. Raban Kimungu, 10, was a Grade Four pupil, and the 10th and last born child of Paul Muiruri and his wife.

Muiruri says the family has never recovered from the demise of his son, and they continue to wonder what they could have done to prevent it.

“It happened on a Sunday when all of us were at home. My child had requested his mother to make chapatis for him. My wife asked one of my daughters-in-law, the wife of my son, to make them.

“The boy took his mother’s phone and played with it as the meal was being prepared. He was later sent to the other house to get onions and he switched on the phone’s torch and went to collect them. When he took too long, one of my daughters-in-law went to check on him and found his body dangling from the roof. He was dead,” says Muiruri.

Like the other parents, Muiruri says his son did not exhibit any signs of being disturbed or being sad and had been jovial all along.

“He looked happy, and he had even asked me how many days were remaining till Christmas and we had counted the days together. He had said that a relative who was very close to him had promised to buy a bicycle for him for Christmas and he was obviously looking forward to the day,” he says, adding that the relative confirmed he promised him the bicycle.

Raban loved playing games on the phone, dancing, athletics and watching movies. He also loved to tell stories, and would attract older people to his circle. He was a known and confident entertainer who would be invited to parties and birthdays.

Of all the challenges he has gone through in life, Muiruri says the loss of his son through suicide was the hardest.

“Everything reminds me of him. When I am happy or sad, I think of him. I watched the Tokyo Olympic Games that were happening recently and remembered that my late child would be in the frontline to cheer the athletics team since he aspired to be one. When people dance, I remember him and try to imagine how he would do it. It is difficult for me and my family,” he says.

While Kenya does not have statistics, suicidal thoughts and self-harm have been well documented in children and teenagers, with mental health experts saying that too little attention has been paid to this group.

“First of all, today’s parent is too busy to even interact with their child and note changes in their actions, reactions and interactions. Friends are setting a very high standard and these children are getting exposed to too much violence on the internet,” says psychiatrist Mary Karanja.

Mental illnesses affect children, just like they affect older people and it does not necessarily have to be stress-related. Some of them, she says, are hereditary, others are triggered by social factors or lifestyles.

“It is wrong to think that someone who is about to take their own life will exhibit signs of being disturbed or even tell you that they are going to do it,” she cautions.

Dr Karanja also says parents are increasingly allowing their children to be exposed to triggers of Post-Traumatic Stress Disorder (PTSD).

“We are allowing children to watch horror movies, violence and other disturbing events. Why on earth for example, would a parent allow a child to go witness a murder, accident or suicide scene.

“Just watch the news and see how many children form a crowd that turns up at a murder scene. Those children may not exhibit signs of being disturbed at that particular moment, but the gory scenes stick to their mind and they trigger mental illnesses, especially if they are repeatedly exposed,” she says.

The Centers for Disease Control and Prevention does not include elementary or middle school students in its biannual youth survey of risky behaviours. And suicides among children 10 and younger remain rare, with 29 reported in 2019, according to the CDC.

Mental health professionals — psychiatrists, psychologists and counsellors — say the statistics on child suicides are disturbing, as more children as young as 8 are taking their own lives.

According to Dr Bishop Davis Gatua, a counseling psychologist and a lecturer at Kenyatta University, juvenile suicides have been reported on an upward trend, with statistics putting them at 17 percent of the suicides across the country.

“Depression triggered by stress and poverty, I would say, is the leading cause of these suicides and cases of children killing their parents,” Bishop Gatua says, adding that some children who feel neglected, abused, are in child labour or are molested, among other reasons, resort to suicide.

The government has done little to control this wave of suicides since it only issues statements when such cases happen, but never really looks at the root causes, says the bishop. He is calling on the community to identify NGOs, churches and children’s homes where mental health can be addressed.

Following increased suicides, some leaders, including Nakuru Governor Lee Kinyanjui and Molo MP Kuria Kimani, have called on the government to declare suicide a national disaster. They urge religious leaders to step up counselling of minors, to help combat suicide, which has become rampant in Molo, Elburgon and Kuresoi.

He urges parents and guardians to talk often with their children and ensure they open up and share their problems early.