'Where the problem began': MP Jaguar speaks from his hospital bed 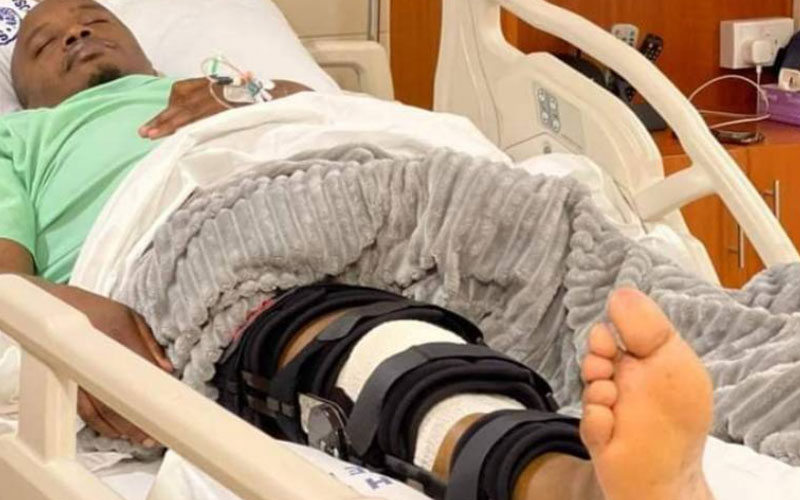 At the time, Jaguar also dislocated his ankle and was treated at the Karen Hospital. He was discharged on the same day.

However, the problem persisted, prompting him to seek outpatient treatment at various city hospitals. None of the sessions seemed to permanently end the pain in his knee.

“Last Friday (June 25), the pain was at its peak! The condition also affected my nervous system. As a result, I temporarily lost vision,” Jaguar told The Standard.

“It was then that I said: ‘no, I can’t continue seeking run-of-the-mill treatment, let me visit the hospital for proper check-up and treatment’,” added the MP.

While at Nairobi’s MP Shah Hospital, Jaguar was subjected to multiple tests, and doctors discovered that his knee cartilage and bones had been affected by the July 2018 knock.

A surgical operation was consequently recommended.

The procedure, which lasted nearly two hours, was conducted on Monday, June 28.

“I’m now feeling relieved; the pain has significantly subsided. Doctors have told me I might be discharged on Sunday or Monday,” Jaguar said.

“I am grateful to my family, friends, Starehe constituents and Kenyans at large, who called and texted to wish me well as I recuperate. I’m optimistic that I would soon be back on my feet, and able to do my legislation duties with ease,” he said.

On July 12, 2018, protests rocked the Marikiti/Wakulima Market after Nairobi County officials embarked on evicting hawkers from the 55-year-old facility.

Violent chaos erupted after the officials arrested a trader, whom they had mistaken for a hawker.

“The officials beat up the trader, sparking uproar among businesspeople in the market. It was then that police were called by the county officials to restore order. I moved in to help pacify the situation, but the police officers were aggressive, hurling teargas canisters haphazardly. One of the canisters hit me on the knee,” said Jaguar.

It is that knock that has caused the MP three-year pain, which he sought a permanent solution to last Friday.

On Monday, June 28, musician Gabu, who is Jaguar’s friend, suggested the pain in the lawmaker’s knee could have been aggravated by his regular strenuous physical exercises.

“We regularly go for our routine jogs at the Karura Forest, and his (Jaguar’s) knee has been recurrently causing him pain. He had no option [but to seek comprehensive treatment]. So, we accompanied him to MP Shah Hospital,” said Gabu.

Jaguar now says “had he known, he’d have sued the Police Service for causing him pain that has lasted several years”.

“I wish I knew [that I have a right to sue for the injuries caused],” he said, adding: “It’s now too late to press charges. I can only hope to heal, soon.”

Owner of dam in Solai, which burst in 2018 killing 48 people dies