"I already know the man I will marry!" Saumu Mbuvi 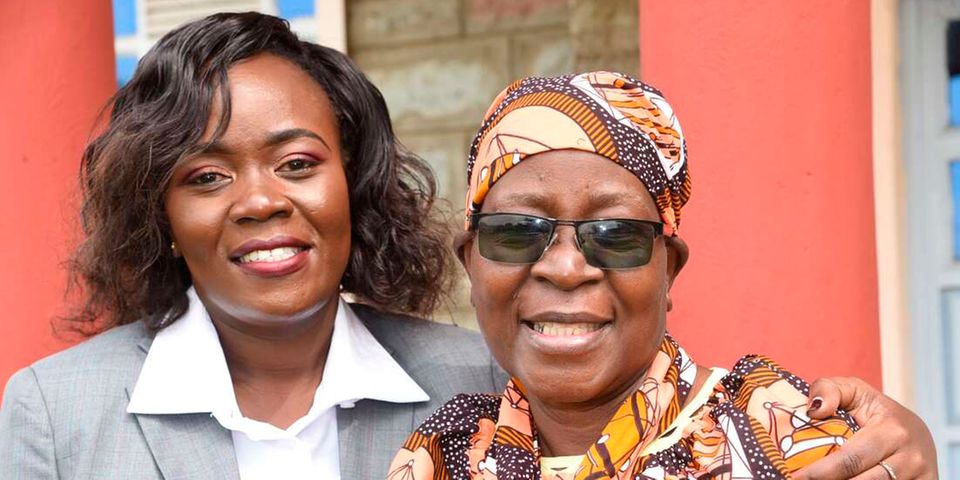 Growing up, Barbara Muyoka, 38, a lecturer at a local university single mother of one, did not know at some point in her life; she would have one kidney by choice. The firstborn of four children had to take a bold decision to be an organ donor to her mother.

Raised in every major town in Kenya before her parents eventually settled down in Nakuru County about 20 years ago, her late father worked for Kenya Railways as an engineer. Therefore, the company would move him from town to town on a promotional basis.

This was the case before he passed on in a horrible car crash in 2001.

“My father’s death devastated me. He died as he drove my mother and siblings from a dinner date at a hotel in Nakuru town. He died on the spot while my mother suffered a broken arm and a cut tongue,” she says.

The ordeal happened a few months before she sat her KCSE at Alliance Girls High School, but Barbara still managed to score a B+.

“I wanted to be a doctor, but unfortunately, my mother could not afford to pay for a parallel degree programme. I was lucky to secure a slot at Moi University where I did my Bachelor’s Degree in Business Management,” she adds. Today, she’s a PhD student and a Certified Accountant.

Her mother, Justine, took up all responsibilities henceforth. She was a hardworking high school teacher who juggled between her school work and her farms in the village. She ensured that all her children got the best education.

“My mother started suffering from periodic migraines in 2014. She could not go to sleep without taking painkillers. We would see her rolling on the floor due to unbearable pain. This went on for about five years,” says Barbara.

“The only time I could sleep was after taking painkillers; I was in so much pain and would vomit continuously. My eating habits changed. I had severe throbbing pain and a pulsing sensation on one side of my head that was often accompanied by nausea, vomiting, and extreme sensitivity to light and sound,” adds Justine.

The news of any chronic illness in a family is difficult. In August 2019, Justine started having a swollen face, and analysis revealed that her kidneys had failed, thus water retention in her face. The effect was irreversible, and she had to undergo dialysis twice a week.

“The news of her end-stage kidney failure hit us hard. Being the firstborn, I was devastated and mostly scared for any responsibilities that would await me if worse comes to worst,” says Barbara.

Dialysis is difficult. The treatment filters and purifies the blood using a machine. This helps keep your fluids and electrolytes in balance when the kidneys cannot do their job. This process removes waste products and excess fluid from the body.

READ ALSO  She gave her ex-lover a second chance, but paid with her life

This also comes with several dietary restrictions like reduced protein and salt intake. It is also expensive, and the average cost the family incurred was Sh8,000 per session; this was catered for by NHIF, lifting off the family’s financial burden.

Her mother would throw up and have either low or high blood pressure after every session.

The only way she would be out of dialysis was if she got a kidney transplant.

Her nephrologist in Nakuru advised them to have a transplant. This was a better option. However, two obstacles stood in their way: the finances and the donor.

Barbara was okay with donating her kidney if that would relieve her mother of pain.

“The doctor told us that the first most likely donor should be her sibling. This was impossible because of the age and unmatching blood group. The next likely donor then had to be her child, and that is where my journey as a kidney donor began,” she says.

To qualify as a kidney donor, your blood group must be the same as the recipient. Amongst Barbara’s siblings, she was the only one with the same blood group as her mother.

“I was identified as the only person who most likely could be the donor. I was never scared and just felt honoured to be the only one capable of giving my mother my kidney,” says Barbara.

Justine wished that the donor could have been anybody else but her child but warmed up to the idea of a transplant compared to the weekly dialysis.

“It is so scary when it is your child. But my daughter has always been a brave girl, and we did not have an option of another donor,” says Justine.

Barbara did not fear donating her organ but was worried more about her child if anything went wrong. She, however, joined various support groups like the Renal Patients Society of Kenya, where she got a lot of encouragement from previous donors.

Being identified as a potential kidney donor is just the first step of a very long journey. The battery of tests that followed left them financially and physically exhausted.

The cost of prescreening for both the donor and recipient was over Sh400,000.

In the course of screening Barbara, some nodes were discovered in her breasts. Nodes are an indication of cancer.

The cancer scare came as a shocker, and a simple mammogram was not enough to tell whether she had breast cancer or not.

“I had to undergo a biopsy. Waiting for the results was the most difficult time of my life. I was not scared of the diagnosis, but I was scared of what it meant to my mother, whose hope was in me. Luckily the results turned negative,” she says.

The transplant team accepted all her results at Moi Teaching and Referral hospital in Eldoret.

They were hoping the call was about the transplant date. It was not. The caller from the transplant team informed them that she was a suitable candidate for a donor, but her weight was too high.

I had to lose weight

“We were crestfallen. I was 84 kgs at the time with a BMI of 32. The team insisted that unless I lost 11 kgs, I would not donate the kidney. I did not think that it was remotely possible to lose such an amount of weight in less than a year,” says Barbara.

She admits that she was devastated and felt that she was the reason the transplant process had hit a dead end. It was either she lost weight, or there would be no transplant. She had tried losing weight before but had always given up.

“I took the first step by cutting out sugar and wheat. I enrolled in a gym, and I lost 10 kilograms in two months. I continuously updated the transplant team on my progress. They gave us a transplant date- May 2021, before I even lost the required 11kgs,” she says.

Barbara and her mother were admitted to the hospital three days before the transplant date.

She was confident and hopeful, knowing she was saving her mother endless days of pain. However, on the day before the procedure, she had cold feet, wondering who would care for her daughter if anything happened in the operation room.

The transplant team at the MTRH took them both through psychological counselling.

Barbara was severally asked whether she had been coerced to go through this.

“The anaesthetists came to see both of us the day before the operation, and both encouraged us. On the morning of the operation, at 6 am, we were wheeled to the theatre with more than 20 staff in the operating room,” she explains.

“My mother and I were in separate partitions, so we did not get to talk. I just prayed for a successful surgery, and in case we did not make it, that my siblings and my daughter may find peace as we both were unsure of the outcome, “she says.

After six dreadful hours in the theatre, mother and daughter woke up with excruciating pain in the surgery area.

“Painkillers managed this. I was able to walk with the help of a physiotherapist a day after the surgery. I got discharged four days after the twin operation,” she says.

Her mother stayed in hospital a little longer than she did. Her new kidney picked up well.

“I could not do difficult tasks or lift heavy objects for about a month. I was also advised to take 3 litres of water per day, and there was no dietary constraint. To keep me active, after two months, I started walking 10Kms daily,” says Babara.

Justine’s immunity had to be brought very low so that her body did not reject the new organ. She however had to stay within the vicinity of the hospital due to the required frequent checkups after the procedure.

Barbara and her siblings decided to rent a house near MTRH to ease their mother’s weekly hospital visits for reviews.

“I was secluded for three months and could not see visitors as my immunity was deficient. I have a caretaker who is helping me with the chores,” says Justine.

Barbara is now back to work. As a lecturer, her work involves long hours of standing.

“I have had no challenge with this. I also have a very supportive employer who has been checking on me. I, however, do not lift heavy items. My remaining kidney is functioning well,” she says.

“My mother uses medicine worth Sh30,000 per month. I intend to start an organisation that advocates for organ donation. This is to encourage more live donors to donate their organs to those in need,” says Barbara.

In Barbara’s donation journey, several people have shared how their siblings, children and even parents have been sceptical about donating any of their organs despite being suitable donors.

“I do not blame them. The fear of the unknown is real. I, however, encourage potential donors to do it without fear. A kidney transplant enhances the quality of life of an end-stage chronic kidney disease patient. It enhances your life as a donor too. The feeling is priceless,” she says.

Someone thinking about donating one of their kidneys to help someone else has many things to consider. It is something that has to be thought about seriously from a personal point of view.

Tests will be done, which may take quite a long period. This ensures that the donor is in good physical health and that the kidney is a suitable organ for transplantation.

It is worth remembering that the operation to remove a healthy person’s kidney is – as far as their own body is concerned – not of any direct benefit.

Several investigations are performed that may uncover an unknown medical condition. Also, the donor needs to consider facing their future with one kidney.