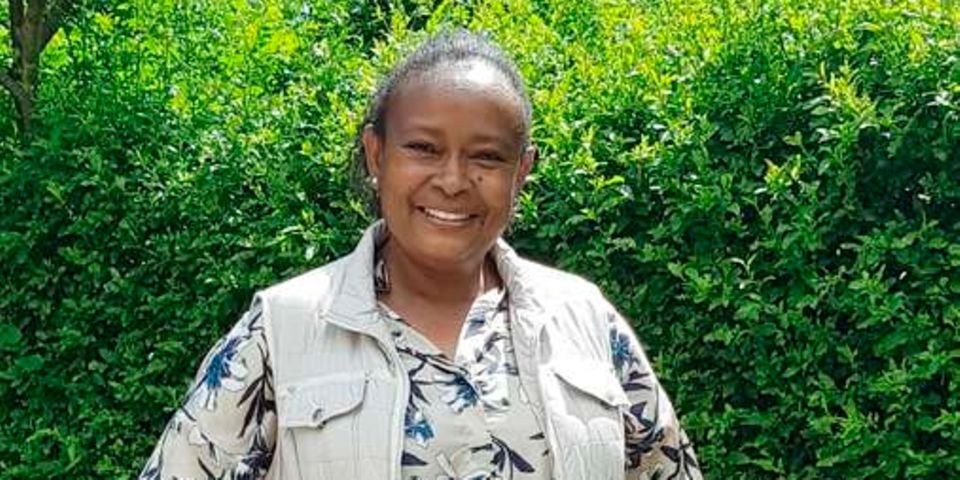 Growing up in Karatina, Nyeri, Veronica Mwangi was disturbed by news of women dying from bleeding.

When in Class Four, for instance, a girl in her class lost her mother. A couple of months later, people were still talking about her death and how, without medical attention, she had been bleeding.

She also realised that women shied away from going to the hospital. The nearest hospital was about 15 kilometres away. Veronica noticed that one of the reasons women did not like going to hospital was the language barrier as the hospital was run by missionaries from Italy.

During one of the preteen girl talks organised by the Catholic sisters who assisted the missionaries at the hospital — when she was in Class Six — reproductive health came up.

“The sisters mentioned that many women were unable to express themselves when it came to matters reproductive organs and suffered silently,” Veronica recounts.

Explaining your problem to a doctor with whom you do not share a common language is one thing. Telling him or her that you are bleeding in the groin is another.

From the preteens talks, it was planted in Veronica’s mind that menstruation is a natural process. What she could not comprehend, however, was how a natural process would again turn into continuous bleeding and become life-threatening.

The curiosity stayed with her until the year 2000, when she set herself on a journey searching for answers.

“I am a trained meteorologist. But I felt that I was not making much impact. I needed to touch human lives,” Veronica says.

She left meteorology in 2000 and went to work in an administrative post at a laboratory her husband had partnered with a doctor to establish.

While she admits that meteorology has no direct connections with caring for cancer patients, the networks she had built while there proved crucial in the growth of her charity work.

In the laboratory, there was a trend of urine tests and women’s hesitation to see a gynaecologist. From what she observed, nearly all women visiting the lab did urine tests because of its non-invasive nature. They needed simple tests and results that they would take to a pharmacy instead of further examinations.

“I wanted to know why this was happening. In the lab, I researched some more. I later learnt that the bleeding was from the reproductive organs and that it was cervical cancer,” she recalls.

In 2009, with the knowledge, she shifted her focus to knowing why women feared Pap smear, a time during which she got another revelation.

“I witnessed another problem I had seen while in the upcountry; that of women shying away from going to the hospital,” recounts Veronica.

She adds, “I followed some cases from the lab to Kenyatta National Hospital and started visiting the ward where cervical cancer patients were admitted.”

“I am naturally a very quiet person, and I do a lot of listening. I would hear their stories of pain. Some were in stage four and were very lonely and dying. They wanted to talk,” she notes.

Veronica encouraged the patients that they should go upcountry and share their experiences with others.

One of the patients from Naivasha had mentioned that she had not disclosed to her close family members about having cervical cancer. However, when she was finally discharged from the hospital months later, she was more enlightened.

“She was ready to face her kin at the grassroots and tell them that her painful journey would have been prevented if only she had the awareness. She was not going to let another woman undergo the same pain in silence,” Veronica recalls.

“That is how I started the awareness program,” she adds.

“After meeting many patients, we would go to their homes upcountry, and from there, I would learn some other things about them. Some had nowhere to stay when they came to Nairobi for treatment,” she adds.

During the awareness program, one patient’s story nagged Veronica. It made her feel that she was not doing enough for them.

“She was so close to me, and we went for sensitisation programmes with her several times. During her last days, she had no place to stay. The only place she could go to was her brother’s at Majengo, who had a family and stayed in a single room. That picture of her last days really disturbed me. I wanted to do more for her but wasn’t in a position to.”

Her friend’s brother had a young wife and child needed privacy. Yet the friend would have felt dignified if she had a house of her own, a place at which she could have peace of mind.

However, Veronica was not in a position to rent her a room due to financial constraints.

Veronica feels that her friend’s caregivers’ pain would have been bearable with her in hospital, which was not the case as admitting her to hospital required money.

When she died, Veronica made up her mind to do more for cancer patients.

Before this, Veronica had in 2009 witnessed the pain her husband went through when his aunt was in her last stages of cervical cancer. She wanted to do more to alleviate the pain, not only of cervical cancer patients but also that of their immediate families.

“I went to Kibera in 2011 and got a single room. We would lay three mattresses on the floor. From there, it became easier to take them to Kenyatta Hospital and back to give them food. In late 2013, I moved the three-roomed facility to Kitisuru,” she says of the foundation of the Rescue Centre.

After meeting patients at Kenyatta, some started approaching her after being referred by the ones she had met at the hospital.

With time, some women came saying that their husbands at home were suffering from a particular cancer, and that they had benefited from listening to the women. So, Veronica started taking in men as well.

“But men are not fighters. They give up easily. They take a lot of time before opening up, making the pain eat them so much before they decide to speak,” she laments.

While the program was started for cervical cancer victims and survivors, Veronica over time has welcomed others with breast cancer as well.

“Others would come saying that they had no support groups so I decided to incorporate them as well.”

Veronica says that with the Covid-19 pandemic, she cannot have as many people as before at the centre.

“At the onset of the coronavirus, the lockdown barred many from travelling for treatment, resulting in them missing appointments, which is costly. The travel expenses also went up,” she says.

However, the biggest challenge was the mental torture from the restrictions that stopped them from meeting and from not having visitors.

The patients go weekly for the support meetings where they do crocheting of floor carpets and small mats, knitting of sweaters, weaving of baskets and beadwork.

“The centre has two machines for knitting, and we have empowered five women with the sewing machines to take home,” Veronica reveals.

Also, during this time, Veronica explains, “we go round each person giving their experience, talking about their progress since the last meeting, and encouraging one another.”

The centre has a professional counsellor although they can only manage to pay for five people each year to undertake 10 sessions.

The counsellor also volunteers for group sessions once in a while, and the priest at St Catherine of Siena (where they hold the meetings) offers to counsel them too.

Ninety-four people go for the support group meetings, six of whom are men. Most of them are aged 36 onwards. The youngest is a 26-year-old woman.

As to how they managed to provide for the patients, she says, “Before I started getting support, my husband and I would pay for their food, accommodation and treatment from our pocket.”

But this changed when the government implemented the use of the NHIF cover. Veronica also appreciates the fact that the government has helped create more awareness. However, her efforts to get government funding has remained futile.

“With the donations that come through, I pay for their NHIF, which covers about 70 per cent of treatment. A single scan to know what treatment a patient needs costs Sh 70,000, and NHIF covers Sh 40,000, leaving Sh 30,000 for the patient,” she says.

Last year, she paid for three patients Sh 30,000 each for treatment.

Veronica resorted to other sources of funding as the project expanded, among them the Cancer Awareness Walk, which started in 2015.

“The project was growing, and we did not have money to support the patients. The walk was one of the easiest ways to arrange for funding while seeking support,” she says.

They have no main donor but have benefitted from monthly individual donations— women giving food; the National Bank Westlands Branch Welfare Kitty; friends, Catholic International Community and the Braeburn Garden Estate School children who make bangles, bags and hair bands and sell to support them.

Veronica’s gift to touch human lives did not start with talking to cancer victims and survivors.

Being the firstborn girl in her family, she would find herself playing mother and taking care of the other siblings.

And when she got married to a man who happened to be the firstborn in his family, she would take care of her relatives staying with them.

“My husband used to tell me that I was good at patient care. During my time with him, the relatives who got sick would come and stay in our house while seeking medication in Nairobi,” Veronica recalls.

“I have known that each person has something to offer to society.”

She has also seen endurance and the will to live in the people she would least expect.

One such case is Lucy Wangui, referred to her by a nurse from Ol Kalou hospital in 2016. She was 73 years old then. They had sought treatment at four different hospitals to no avail, some doctors ruling out surgery.

At Gaichanjiru Mission Hospital, Thika, they got a doctor who was willing to operate on her. It was not as expensive as it is a mission hospital. Two months later, Lucy started her radiotherapy.

“She has survived it and is a real motivation to the women in the group,” she narrates.

She did 30 radiotherapy sessions in 2017. Lucy had learnt making kiondos as a girl and now teaches the others in the group.

The 52-year-old has been married for 30 years and has two daughters, who have also remained instrumental in supporting her work.

“My daughters help the survivors with the beadwork and knitting by providing new stylish patterns and designs. They are also the ones who design the posters for the Annual Cancer Awareness walks,” she says.

All the family members and their friends participate in the walks.

Related Topics:NewsVeronica Mwangi
Up Next

My preterm baby made me feel less of a mother

Man who stole iPhone 11 Pro Max, lost it at chang’aa den to be sentenced