Why Martha Karua is yet to recognise President William Ruto 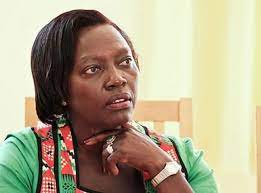 Martha Karua claims that she has not yet accepted President William Ruto’s legitimacy as the Head of State.

In an interview with the BBC’s Ian Wafula, Karua, who ran as Raila Odinga’s running mate as an Azimio la Umoja presidential candidate in the August 2022 elections, affirmed the attitude.

She said: “The law recognizes him (Ruto). But not me.”

Mr Odinga and Ms Karua finished second to President Ruto and his Deputy Rigathi Gachagua in the August 2022 polls.

The losers moved to challenge the election results at the Supreme Court but lost in the court.

Mr Odinga has since consistently blamed both the Independent Electoral and Boundaries Commision (IEBC), the Supreme Court, and foreign forces whom he did not name, for robbing his victory.

READ ALSO  Jane Mugo: I shared my man with four other women
Related Topics:Martha KaruaNews
Up Next

Miguna- Please do not add me to WhatsApp groups

Mithika Linturi: I am worth Kshs.1.2 billion