In addition to donning a green beret, Col. Lengusuranga also dons a brown uniform and a black peaked cap with a red stripe and a badge in the middle, while Lieutenant Colonel Damaris Agnetta serves as his deputy. The cap features a gold stripe as well.

They were picked to take the place of Brigadier Timothy Lekolool and his deputy Colonel Racheal Nduta Kamui from the Kenya Airforce. The pair is both from the Kenya Army.

The Kenya Army wears Jungle Camouflage, which is primarily sage green with an olive undertone, whereas the Navy is primarily white. 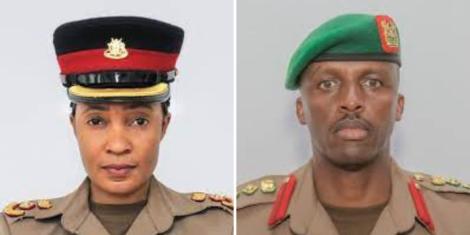 As evidenced by his green beret, Colonel Lengusuranga was chosen from the Special Operations Regiment of the Kenyan Army.

Lengusuranga is notably ranks lower to his predecessor Lekolool, who was elevated to Brigadier and transferred to the Department of Defense (DOD).

A Brigadier must have excelled in the military for 12 years before being promoted. They are responsible for leading brigades and battalions. A brigadier’s badge consists of the coat of arms and three squares.

To be ranked as a Colonel, on the other hand, one must receive training at the Defence Staff College. With a badge that features two squares and the KDF coat of arms, they work as staff members.

The emblem for the Colonel Lieutenant, who is in charge of up to 600 soldiers, only contains one square and the coat of arms.

Along with other responsibilities, Lengusuranga and Agnetta will accompany the head of state to events, open his car door, and carry his personal belongings.