Public worries about the transmission of presidential results across several TV stations have grown, with some people thinking that the press is not reporting the correct tally figures.

The fact that the Independent Electoral and Boundaries Commission (IEBC) has allowed media outlets, politicians, members of the public, and other interested parties to independently track the August General Election by sourcing data from the electoral body for the first time in Kenya’s history is a major cause of the confusion.

To complete the results, many media outlets set up their own tallying centers, but many of them are showing varying results, much to the chagrin of Kenyans who are now undecided about which TV station to switch to.

Since then, Citizen Digital has identified a number of variables that may have contributed to the broadcast of inconsistent presidential results.

These factors include the amount of labor used, the length of time needed to analyze data from IEBC, the sporadic nature of how IEBC uploads data to its platform, and the method used by media outlets to download and total the same data. 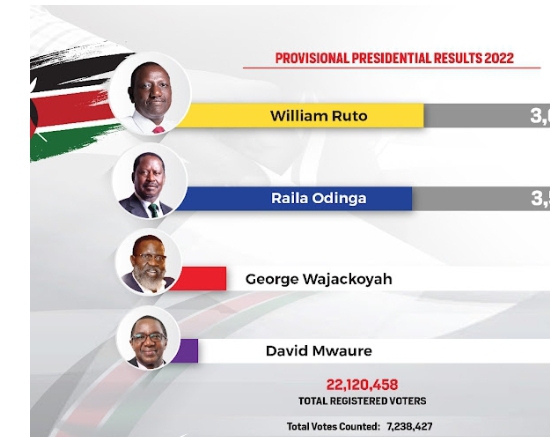 The results will vary frequently since the IEBC is unpredictable when it comes to posting the results to its platform and because media houses download the results at random, without taking into account the speed and amount of labor required to process the data.

David Omwoyo, CEO of the Media Council of Kenya (MCK), has since made an effort to ease the public’s concerns.

Even though he acknowledged that the worries were legitimate and well-founded, Mr. Omwoyo emphasized that it was only normal for various TV stations to present contrasting results because the order of the votes could differ depending on how the stations in question received the results from various regions of the nation.

“The Council confirms that the results being projected are all from the Independent Electoral and Boundaries Commission (IEBC) though the sequencing by different media houses is from different voting areas,” said Omwoyo in a statement on Wednesday.

Mr. Omwoyo continued by saying that MCK is looking into measures to make sure that all TV stations simultaneously announce the same findings.

“The Media Council of Kenya is in consultation with Media Owners and Editors to find an urgent solution to this to ensure Kenyans receive synchronised results. Media houses have previously executed joint production with remarkable success on such matters of national interest,” he said.

He also reminded Kenyans that the IEBC will not release the official presidential election results until the counting is complete.