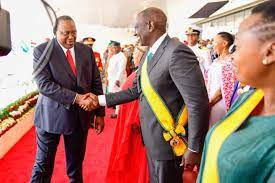 Details have revealed that Deputy President William Ruto who has served the position for ten years was planning to steal the thunder from his Boss President Uhuru Kenyatta by resigning as the deputy president.

Sources close to our team noted that President Uhuru left out his deputy from a brief State House function ahead of his speech to the nation to mark the 59th Madaraka Day at Uhuru Gardens, Nairobi.

After conferring state investiture to a list of Kenyans, the President went straight to address the nation.

Tellingly, Uhuru also skipped his deputy as he recognized the dignitaries present.

After the recognition of those present, Uhuru welcomed Sierra Leone President Julius Maada Bio, who is the chief guest, to address Kenyans.

“Before I talk, I want to invite Sierra Leon president to make his remarks,” Uhuru said.