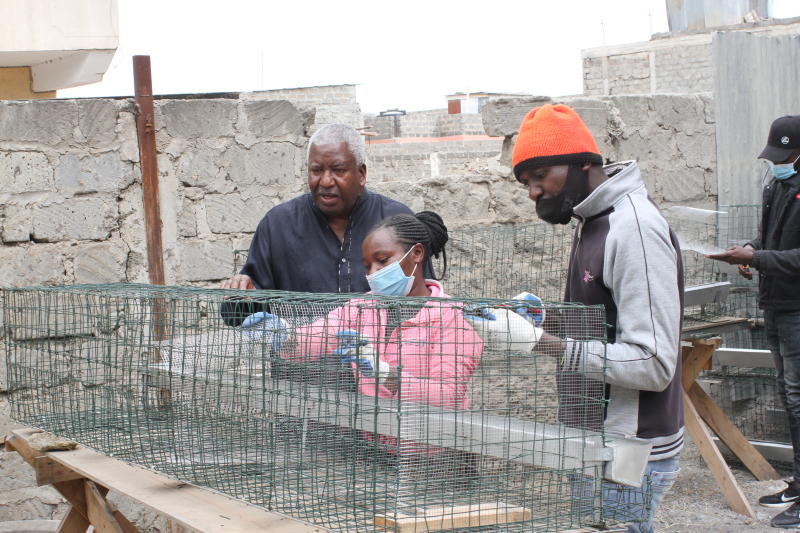 After realising that all battery cages in the country are imported, and it took poultry farmers considerable time to source them, plus the huge cost involved in their importation, one entrepreneur resolved to give it a try and manufacture the poultry housing units.

Herman Muli Bigham, the founder of Tosheka Products, shares his entrepreneurial journey with Enterprise. He also explains how he has addressed concerns by animal welfare activists that cages are harmful to birds due to their restrictive nature.

What drove you into battery cage making?

It all started with my wife who had developed an interest in rearing poultry. And when she started – being her pet project – she never wanted me involved at all. I saw her struggle in acquiring the battery cages, chicks and feeds. Months later, she started having problems with stressed chicken and some dying in what we suspected could be due to poor quality and design of cages. The designs were generally geared towards maximizing profits without consideration for best space utilization, sanitation, structural stability, longevity and environment for the health and productivity of the chickens. At this time, she allowed me to intervene. I closely studied the battery cages and the first thing I noticed was that they are small for three or four birds the manufacturer recommends. Secondly, they were also weak. Yet, my wife had used a lot of money to purchase the cages. Additionally, she had also waited for some months before the supplier who was importing the cages to deliver to her.

What was your next action after discovering cages were of poor quality?

I started my own research on poultry rearing and was intrigued by how big an industry it is in the country. With that in mind, l knew thousands of poultry farmers were struggling to import battery cages at a costly price since there was no one or company manufacturing locally. I couldn’t find an answer to why Kenyans who are touted as a genius in innovations were yet to start manufacturing battery cages locally. Obviously, lack of easy access to cages had created a huge demand and thus high prices. Yet, poultry farmers were still determined to get them for their farming ventures. I took the challenge to be the first to make a locally made battery cage system.

How easy was it to start manufacturing cages locally?

It wasn’t easy though but l was determined to excel. At first, my aim was to support the development of poultry in the sector by at least solving one problem of easy access to cages that would eventually lower purchase costs. First, l looked at the deficiencies of the cages already on the market so as to improve on what l was to make. I also learned a lot through repairing the cages my wife had bought because some had many loose ends. The first cage l made still at my homestead. It was a false start. However, I kept learning and improving until l made sure that it was now better. Later, l recruited three young people, trained and now manufacturing cages in my firm located in Kitengela. After few weeks, we designed patented and produced the first Kenyan made commercially viable battery cage system.

Who was your first client and what was the response?

My wife of course. She demanded to take the first best cages we produced after she realised they were better. Then, they were first noticed by her visitors and friends who inquired where she had bought them. From there, word started going around about locally made cages. Some requested to purchase, and with that, more people started coming for them. We have since supplied quite a number to individuals and organisations. The number of customers keeps increasing by the day.

What is the manufacturing process and how much does it cost?

The process starts with metal structures, welding, assembling, making extra cages, piping, setting up the water in the drips troughs. In a week, we make four units of cages. And each unit that comfortably holds 120 birds goes for Sh40,000. This amount might look expensive but anyone who has imported or tried to import foreign cages will tell you this is very cheap. That is the response l have been getting from the people who have imported cages. All the materials we use are from local industries.

Why would one opt for your cages?

Our cage system is designed to accommodate 120 or 160 layers comfortably while maximizing space utilisation. It is constructed of a steel support frame and the cages are made of PVC covered metal mesh and individually supported but the steel frame system. The cages are installed back-to-back and can easily be disassemble transported and reassembled. They come preassembled ready for transport and installation and can be quickly and reassembled within half an hour. Our support stands are built to accommodate either three or four tiers of cages and gives the poultry farmer the option of increasing from three to four tries and increasing capacity at a later date without requiring any additional space. At any time, you can expand your productivity by adding cages to the length of our existing system. Our mesh of battery cages system is made to last for around 20 years.

The cages we’ve built are much bigger than the usual cages. They can accommodate four chicken at most for each cage. Each cage has enough space for feeding and water. You can’t compare our cages with the cages from China where almost every cage is from. They are also very strong structurally.

What are some of the challenges that you have faced?

Initially, locating the materials was challenging especially because l was setting out to improve on the product that was already on the market. So l needed materials that can be light for easy transportation and equally very strong. It took a lot of research to get and settle on that particular material. Also, people who were used to imported cages needed a lot of convincing to try. Many people tend not to trust a new product on the market even if it is 100 percent perfect. They will want to see the product working well for another person before they take it. Also, people think anything imported is the best. However, those who have bought from us have been our marketing ambassadors.

The future is to improve and have world-class battery cages where even foreign manufacturers will be coming for our products. We want to lead the market not just in Kenya but the entire world. I want to partner with various stakeholders in the poultry sector to scale up the production and other support. I want to employ more of the youths in this project and train even more as a way for creating employment.