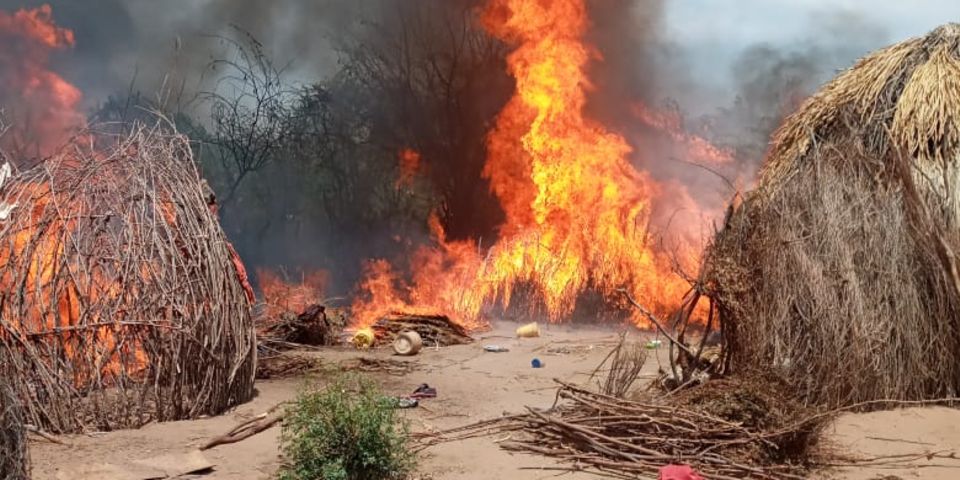 Authorities on Friday raised more concerns about recurring wind-driven wildfires in a village in Turkana County, reporting more incidents and severe damage since the first case on Wednesday.

Nanam Ward Administrator Obed Echip told the Nation that in less than 20 hours, more than 200 families in the remote Lotoom 2 village, that is prone to militia attacks, were left homeless.

Mr Echip said that on Thursday, a fire originated from a sisal-thatched hut, which was being used as a kitchen.

“The kitchen caught fire as a result of the strong winds being experienced during the dry season. The fire spread very fast to nearby houses,” he said, adding 78 of them were completely destroyed.

He said the affected houses were made of wood, sisal and iron sheets.

The administrator said a Kenya Airports Authority’s fire engine from the Lokichoggio airport and a water bowser from China Railway No. 5 Engineering Group Company Limited, which is constructing the 88km Kalobeyei River- Nadapal/Nakodok (A1) road, were used to put out the fires.

He said that in the first incident on Wednesday, more than 100 families spent the night in the cold after their houses went up in flames.

Red Cross officials are leading a team that includes county and national government officers in assessing the incidents and planning a response.

Mr Daniel Ekiru, a youth leader, said the victims are also experiencing hunger due to a prolonged dry season and are in urgent need of food and shelter.

“Security patrols should also be increased because the village is now exposed to militias as a fence was destroyed by the fire,” he added.