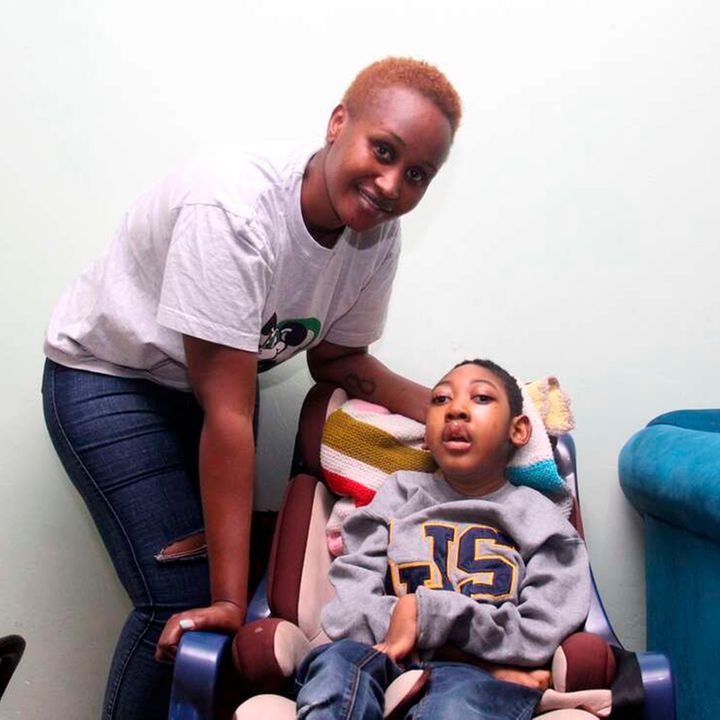 “My water broke at around 10am. My girlfriend, who had come over, rushed me to Nairobi Women’s Hospital, but the registration procedures there were complicated and the line was too long.

“At Ruaraka Uhai Neema Hospital, I was all alone, because they have a policy that does not allow any family member or friend when you go into labour. My friend was sent away when we arrived.

“I did not dilate easily. They gave me tablets and shots, but nothing was happening, I asked for a Caesarean delivery, but the two nurses attending to me refused.

“The male one kept pushing the baby, trying to force him out by pressing on my tummy, while the lady brought a gadget that she used to pull out my baby. I later learnt that they were attempting something called a vacuum extraction method,” said Ms Muthee.

“Normally, when a baby is born, it cries, but mine did not. I knew there was something wrong. They not only refused to allow me to see or hold my baby, but I also learnt that they had given him a score of 7.8, indicating that he was okay, when he wasn’t.

“I saw them rush the baby to ICU,” says the mother painfully.

Ms Muthee went to Gertrude’s Children Hospital for a diagnosis, and after a series of tests on Declan, it was established that there was a huge swelling on his brain as a result of the outdated methods used during delivery.  Declan was diagnosed with cerebral palsy.

According to the Centres for Disease Control and Prevention (CDC), cerebral palsy (CP) is caused by abnormal development of the brain or damage to the developing brain that affects a child’s ability to control their muscles.

The brain damage that leads to CP can happen before birth, during birth, within a month after birth, or during the first years of a child’s life, while the brain is still developing.

A small percentage of CP is caused by brain damage that occurs more than 28 days after birth and is called acquired CP.

It is caused by infections of the brain, for example meningitis or encephalitis during infancy, injuries to the brain.

CP related to brain damage that happened before or during birth is called congenital CP.

The majority of cerebral palsy (85-90 per cent) is congenital.

“Between November 2014 when my baby was born and January 5, 2015, the medical bill had accumulated to Sh1.3 million, but as of today I have so far spent around Sh6 million,” Ms Muthee revealed.

Her friends fundraised 80,000 shillings to get him a wheelchair, but he still needs assisted devices that cost Sh20,000 and which need to be bought regularly as the child grows.

He also needs Sh10,000 monthly for medication, Sh2,000 shillings for diapers, Sh60,000 for a feeding tube that has to be changed every six months to avoid infections, and a feeding pump at Sh120 weekly.

Then there is the cost of therapy. He gets occupational therapy and physiotherapy.

“At Aga Khan you are expected to do three therapies per week, with each session going for Sh4,500. My boy used to get more than 15 convulsions in a day but nowadays he gets about four, the treatment has helped a lot,” said the mother.

The young boy at first had 10 varieties of drugs he had to take to keep him sedated, with each costing Sh10,770 but now he only does four.

“I have had house helps in the past who mistreated my child while I was at work. One would give him cold food, to a point where he ended up in the High Dependency Unit (HDU) for weeks, which added to my burden of expenses, considering that I have exhausted my savings after losing my job,” she said.

Ms Muthee, who has a Bachelor of Commerce (Finance) degree from the KCA University, worked at Kopo for seven years before the pandemic struck. She admitted she was struggling to feed her child.

According to Dr Maryanne Mwanza, a consultant dietician based in Nairobi, children living with CP need good nutrition and healthy food, but sometimes, they might need more or fewer calories depending on their activity level and muscle tone.

“When it comes to diet, you want to make sure children like Declan are getting enough of everything, from calories to vitamins and when feeding is being done via a feeding tube,” said the expert.

She recommends smaller frequent meals because the child cannot chew.

“Keep in mind every time you are diluting the food, you dilute its nutritional value.

Ms Muthee raises her son alone, after her boyfriend left.

She is in several support groups for mothers with special needs children. This keeps her going.

“Ninety-eight per cent of women in those support groups are single moms. Men always take off. Some in society will see it as your fault. I have learnt never to look for sympathy from anyone, but men need to understand that being there is important, it’s actually not about money,” Ms Muthee added.

According to official documents in Nation’s possession, Ms Muthee filed a medical negligence case at the Kenya Medical Practitioners and Dentists Board (KMPDB, now no longer a board, but a council – KMPDC) in 2016.

The board, while listing what it termed as undisputed facts, established that the claimant laboured for over 12 hours, she was assisted by two nurses during delivery, who administered fundal pressure, an outdated method in delivery and which is extremely dangerous to both the mother and the unborn baby, and the nurses resuscitated the baby as soon as he was born, but failed to call a paediatrician, or any doctor, to observe and monitor the baby.

The board ordered Ruaraka Uhai Neema Hospital to initiate a mediation with Declan’s parents with a view of compensation and to report progress to the chair within 60 days from the date of the ruling.  Five years later, the hospital is yet to report back.

In an exclusive interview, KMPDC chief executive Daniel Yumbya said the council was following up on the matter.

“The aspects of mediation are initiated by the parties and there are other remedies available to ensure compliance with orders and such include but are not limited to suing the respondent in a court of law for noncompliance,” he told the Nation.

Opportunities To Study In America