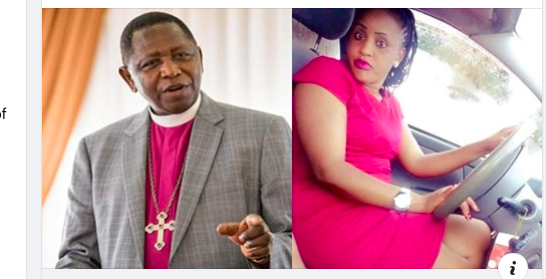 Details have emerged that a woman who was accused of committing adultery with retired Ugandan Anglican archbishop Stanley Ntagali had sought divorce from her husband in December, 2020.

According to documents filed at a local court in the landlocked country, the woman whose identity was not revealed due to legal reasons had alleged her better half (also a priest at the Church of Uganda) was cruel, the Daily Monitor reported.

The couple had tied the knot at Rugarama Cathedral church in Kabale on December 15, 2018, shortly after the man of cloth’s wife had passed on.

Their marriage however, was shrouded in controversy as the duo engaged in endless wrangles over cheating allegations on both sides.

Court records did not indicate whether her husband filed a response towards her claims.

Ntagali had earlier been suspended by the church for having affair with the married woman.

The current Archbishop of the Church of Uganda Reverend Stephen Mugalu argued none of its members was “clean” but noted church leaders who went astray must be punished.

“This adultery is a grievous betrayal on many levels. Retired Archbishop Ntagali has betrayed his Lord and Saviour, his wife and their marriage vows, as well as the faith of many Ugandans and global Christians who looked up to him to live the faith he proclaimed,” the cleric said in a letter as reported by the Nile Post.

Bishop Ntagali on Wednesday, January 18, apologised to Ugandans and his family for his actions.

He argued he was just a man with no exception of sinning while asking his fellow citizens and the Church of Uganda to walk the talk and forgive him.

VIDEO: I married a stranger coz my parents arranged it – Kenyan woman