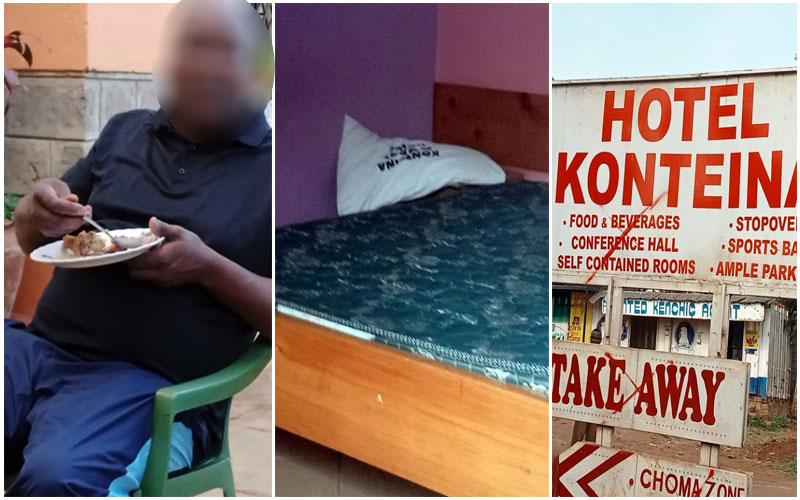 Police in Ndumberi, Kiambu County, have arrested a youthful woman after a middle-aged man whom she was with in a lodging on Saturday dawn died in suspicious circumstances.

Blood was oozing from Muiruri’s mouth, when his body was discovered by hotel attendants, police said.

Muiruri’s companion, who is yet to be identified, was arrested, and is being held at the Ndumberi police post.

The deceased sold pigs for a living, police said.

Preliminary investigations indicate Muiruri arrived at Hotel Konteina with the woman at 4:30am and booked Room Number 7.

Muiruri’s companion is reported to have left the room in the wee hours of Saturday morning, but was stopped from leaving the hotel compound by security guards.

“The security guards said they would only let the woman leave upon getting permission from Muiruri,” Kiambu police boss, Badel Mohammed, told The Standard.

At 9am, the hotel attendants went to Muiruri’s room, where they found him unconscious and bleeding from the mouth.

Police, who were alerted of the incident, visited the scene and found Muiruri had already died.

“He was lying motionless on bed while naked,” Mohammed said.

One of Muiruri’s employees, George Ngugi, told The Standard that he (Ngugi) spoke with Muiruri on phone in the wee hours of Saturday, asking him (Muiruri) if he could proceed with plans to order pigs from a Naivasha-based farmer.

“He (Muiruri) was not okay; his voice was dull and he sounded sickly,” Ngugi said.

“He told me to go to Hotel Konteina where he was, and collect some money. When I arrived there at around 9am, I was shocked to learn my boss was dead,” added Ngugi.

According to Ngugi, Muiruri “often walked around with large sums of money”.

Muiruri’s companion told police that the businessman “had earlier complained of chest pains and breathing problems”.

Investigations have also revealed that Muiruri picked the woman from her house in Mwiki on Friday night and, thereafter, went with her to a drinking joint before settling on spending the rest of Saturday morning at Hotel Konteina.