Woman ‘curses’ son who threatened to kill her over Sh2 million, house 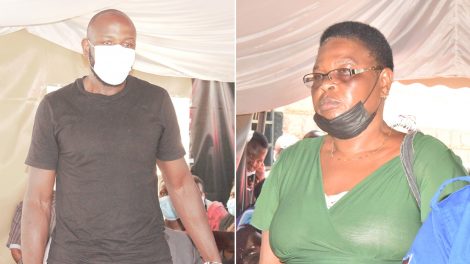 A distraught woman ‘cursed’ her son at the Makadara law courts where he was charged with creating a disturbance by threatening to kill her for failure to give him Sh2 million and a house.

Phelister Akinyi told her last born son Fredrick Horrace Ochieng, “even if you kill me and take the house you will wander in it but you will always see my face in every space”.

Akinyi’s words prompted chief magistrate Heston Nyaga to warn Ochieng that those words amounted to a curse and he needed to act quickly and resolve the dispute before it takes effect.

He is accused of threatening to kill his mother at her home in Greenspan estate, Donholm in Nairobi on diverse dates between January 8 and 11 this year.

He is allegedly demanding Sh2 million paid to his mother as compensation for injuries suffered during the 1998 terror attack at the US embassy.

Akinyi told Nyaga that her son had repeatedly harassed and warned to kill her over her property which he wants to take over.

She said her son has been following her to the banks to monitor her transactions and demands to know the intended use to supposedly ensure she doesn’t ‘waste’ the money.

Akinyi said they are captured together in videos at the bank in which he is reportedly harassing her and has been recording their conversation with his phone inside her house.

“Even when he is attacking me, he does not want even neighbours to intervene. He tells me he is not afraid of the police, maybe I bring GSU or the army. He says I am wasting money, ask him if I have other husbands or I drink,” Akinyi said.

“I have struggled to educate him until he completed school. He had been left behind but I told him he won’t stay without a certificate – he must go to school and finish. I told him I wanted to see him with a certificate even if he failed as long as he brings home a grade E certificate that shows he is a form four leaver.”

She said her son was a disgrace to her as she pays his rent at a house in Umoja estate, feeds and also pays school fees for his five children.

Akinyi said her husband fled because of her son’s constant harassment and threats to kill her and her daughter.

The suspect is said to have stormed her mother’s construction site and chased away workers claiming she was wasting money.

Ochieng denied the charges and claimed he was only helping his mother not to be conned by her construction workers and ensure she doesn’t spend money haphazardly.

He had reportedly called his mother on February 9 and warned that he would kill her not later than February 14 leading to his arrest and detention at the Buruburu police station in the weekend.

Nyaga remanded Ochieng in police custody and ordered for his social inquiry report to be tabled before his courtroom on Friday before he sets his bail and bond terms.