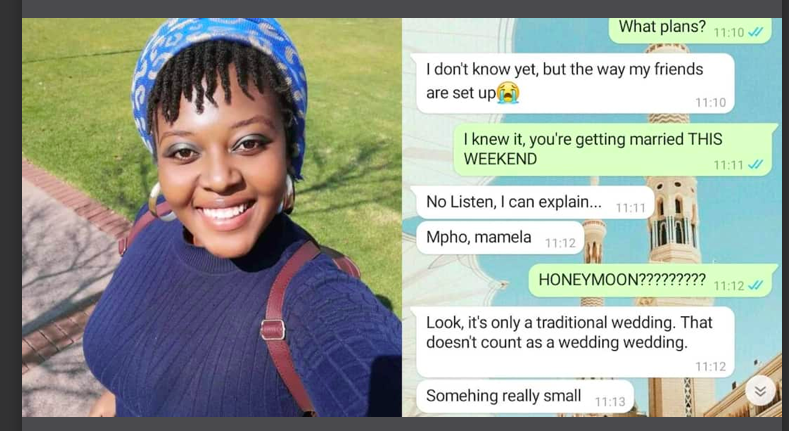 A woman has exposed a man who asked her out on a weekend that he was having his traditional wedding.

Man asks woman out on his ruracio day

The woman, identified as @MphoMoalamedi on Twitter shared a screenshot of their conversation with the guy brushing off his traditional wedding as a small thing.

In the shared conversation, the guy told the lady, they would meet up but he had plans already for the weekend and she asked what kind of plans he had.

“I do not know yet, but the way my friends are set up!” he said and then added a crying emoji

She then told him she knows he is getting married that weekend and he boldly declined.

“No, listen, I can explain. Look, it’s only a traditional wedding, that doesn’t count as a wedding, something really small,” he elucidated.

Their conversation left social media users astonished. Here are some of the things they had to say concerning the guy’s explanation:

“How does a traditional wedding not count as a wedding? That’s the actual wedding, isn’t it?”

“Never let small-small things like a wedding keep you away from the love of your life.”

“This man is a disappointment. He told on himself over a hunch? Throw this one away! Even if you had the actual invite to my wedding I’d still deny.”

“A true legend of the game. Team of the year men’s conference inductee.”

My daughter and I took 21 years to meet