Woman in ICU after being mauled by neighbour's dogs 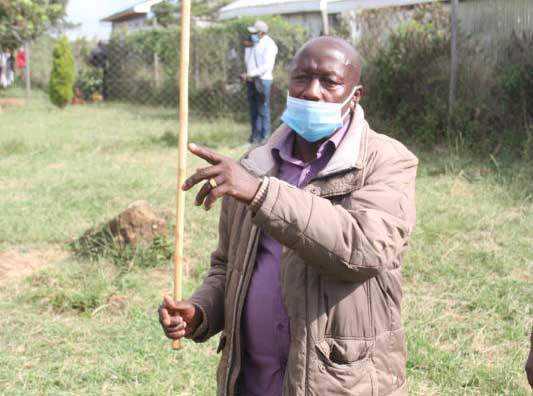 A woman is lying in the Intensive Care Unit of a hospital after she was mauled by a pack of dogs.

Elizabeth Nthenya,39, was returning home from her small business in Rongai at around 8.30pm on Friday when the canines pounced on her. Her kin say doctors informed them that Nthenya’s hand and leg have to be amputated due to the injuries.

At the compound her neighbor, tension hung loose. The carcass of a German Shepherd dog lay on the ground as an interdisciplinary team of security officers prodded on the contents of its belly to check for remnants of human flesh. Neighbours milled curiously, speaking in low tones of the incident that is now threatening the peace of a community that coexists peacefully.

The owner of the dogs, Paul Onditi, dismissed the possibility of his dogs attacking Nthenya. He said the canines are well trained and on the night the incident happened, the dogs were locked up. He said Ntheya could have been attacked by wild animals that roam the area, and that dogs, not necessarily his, heard the commotion and went to save her.

He suggested the possibility of the animal being a leopard or hyena, adding that not quite long ago, a leopard was spotted in the area and they alerted Kenya Wildlife Services (KWS) officers who set a trap, but it is unclear if the leopard was caught.

“They have killed and checked the dogs digestive system and all they have found is rice. No human flesh was found,” said Onditi.

READ ALSO  14 dead in a shootout in Kenya

Nthenya’s husband John Tororony had a different story. He says he heard screams from his wife who was attacked a few metres from their home. The dogs were barking fiercely. Nthenya was screaming, calling out Onditi to contain his dogs. By the time Tororony arrived at his wife’s rescue, all the flesh on her arms had been stripped off. There was blood everywhere.

Her leg was broken, and she could barely stand. When they finally got transport to Kenyatta National Hospital, she had bled so much that she was slipping in and out of consciousness.

“She kept saying the dogs had attacked her. Those were the words she said over and over until she lost consciousness. Now she is in ICU and the owner of the dogs is it was not his dogs. I saw them running back to his compound,” said Tororony.

Police officers at the scene said they are still doing investigations. They collected samples from the dog that had been killed and other items like ripped clothes and hair from the scene of the attack.

“So far, we have nothing,” said a police officer.

Tororony insisted that more of Onditi’s 14  dogs should be killed until they find evidence they attacked Nthenya.

“That is just one of his many dogs. It cannot be the only one being used to make a conclusion that the dogs did not attack my wife,” he said amidst tears. He accused his neighbour of using his affluence to influence the case.

Onditi said he had no objection and was ready for all the dogs to be put down. His only condition was: for every dog killed, Tororony had to pay Sh90,000 as compensation.

“They came here and pointed at the dog that was killed, saying it was the one that attacked them. When it was cut open, nothing was found. Now they want more of my dogs to be killed. It is unfair,” he said. He also said an irate member of the community stormed into his home and shot the dog that was later dissected.

“There was no attempt at a conversation. He just came and shot the dog,” said Onditi.

Village elders from the Ngururunga area in Oloorsirkon, Tuala, where the incident happened had a hard time controlling the crowd that was beginning to get agitated.

Allan Koshopa, the village elder who was trying to mediate the case, said their only plea is for Onditi to foot the hospital bill and accept that his dogs attacked Nthenya.

“I have been a village elder for more than 20 years. We resolve cases that are even worse than this. People go to court and come back to us,” he said.

He added that even though there have been cases of wild animals attacking people in the area, they have been far in between. He said it is unfair for Onditi to ask the man who is a casual labourer to pay for the dogs to be cut.

“The talk should now be how Nthenya’s bill will be paid and who will pay it,” he said. His main worry, he said, was the tension that was already so high in the community with people taking positions that could escalate if not contained.

Tororony said Nthenya, a mother of three, lost so much blood that they have started doing campaigns for blood donations.

On Saturday evening, a team of community members held a demonstration at Tuala police station where the case was reported.

Man stabs boy to death in fight over remote control