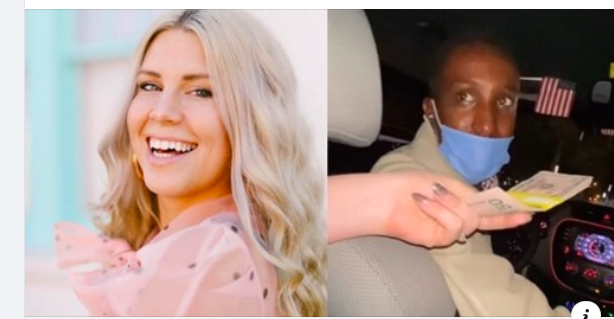 Kindness and generosity in the world could be the only thing keeping many afloat especially during this difficult time where many are struggling.

There have been many recorded moments of kindness and one could probably be headed for the top as many would even considering it as a gift of the year.

A lady TikToker, @lexylately, delighted many on social media after her incredible display of affection after she tipped an Uber driver KSh 109k.

In a video posted on TikTok that went viral on Twitter, Lexy and her husband were seated at the back of the cab as the Somali driver, identified only as Awil, told them a bit about his business and family.

The driver said he had to send money back to Somali and for them whatever he made was sufficient because the money has more value as compared to the US.

“The money you send from here to them (Somalia) it’s big money for them. One dollar is enough that you can eat the whole day,” Awil was heard saying.

The video then cut to the second part where Lexy and her husband surprised Awil with a bundle of $1000 (KSh 109k) and at first was reluctant in accepting it.

He kept asking the couple if they were sure of their humble offer as both Awil and Lexy were moved by the moment to tears.

Awil finally accepted the offer and Lexy informed him that it was a combined effort where fans were involved because they also sent their donations online. Lexy noted it was called the Venmo challenge where they help people through GoFundMe accounts.