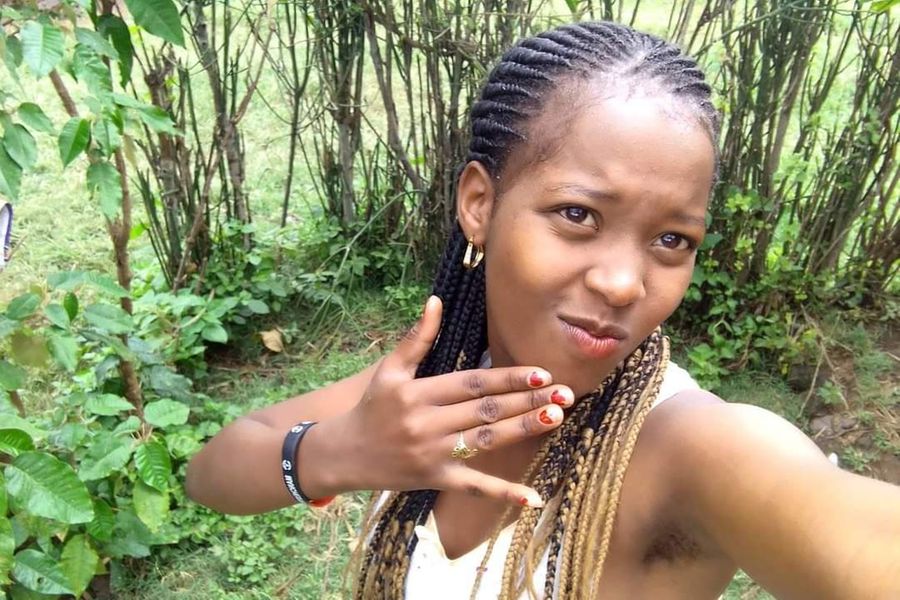 Kenyan detectives investigating the murder of a woman named Esther Wambui, 18, in Ruiru, Kiambu County, have revealed her identity.

She was found dead on Monday, her body stashed in a sack, placed in a suitcase and dumped off Thika Road.

Until her death, she was a server at a fast-food joint at a Total fuel station on Thika Road. Her body was found by locals near the GSU Recce Squad camp in the Ruiru Kimbo area.

The sleuths said Friday that her husband is a person of interest in the killing.

Her husband, Simon Ngigi, 23, spoke to the police for the third day and recorded a statement detailing his last moments with his wife, whom he married seven months ago after she dropped out of school in Form Two.

He said that he escorted her to work at 5.40am on Monday given that it was dark.

Midway through, he returned to their house in the Hilton area of Ruiru at around 6.20am because the day had already broken.

Ms Wambui’s body was found dumped off the road at 5.30am, according to a witness account corroborated by police, throwing doubts on Mr Ngigi’s description of the sequence of events.

Mr Ngigi also told investigators that it was a normal routine for him to escort his wife to work since they got married given the insecurity in the area.

He told police that he realised something was amiss when Ms Wambui did not return home that night.

Detectives asked Mr Ngigi why he did not bother to report the matter to the police the same night after his wife failed to return home or call friends at her workplace to inform them that she was missing.

Ruiru DCIO Justus Ombati told the Nation in his office Thursday that a nylon paper was tied around Ms Wambui’s neck and she had a deep cut in her left breast and appeared to have been raped. Her legs and hands were tied up with a rope.

The killers had also inscribed on her palms, chest and thighs with the words: “Bwana ya Mtu ni Sumu”, loosely translated as “Someone’s husband is a no-go zone”.

Mr Ombati said the writings may be a ploy by the killers to mislead investigators but he maintained that their preliminary investigations had made some gains.

“She died a painful death and we are piecing together her last moments, and as we speak the husband is a person of interest. It is a complex matter but what I can say is that we are moving well with investigations,’’ Mr Ombati told the Nation.

Dropped out of school

Ms Wambui dropped out of Kianjogu Secondary School in Nakuru at Form Two. She would later meet Mr Ngigi, a casual labourer, in Ruiru and relocate to Nairobi, where she was jobless until recently, when she landed a job at a restaurant in Ruiru, earning Sh300 daily.

Her father, Mr Samuel Mbugua, told a local daily in an interview that his daughter left home without notice after dropping out of school.

He would later receive a call from Mr Ngigi informing him that he had married Ms Wambui and he was now his son-in-law.

“When he told me that, I told him that they had my blessings and that I did not have any problem with their union,’’ Mr Mbugua said.

READ ALSO  Grace Msalame opens up about natural birth of her son, Isaiah

We found him at the Ruiru Police Station, looking devastated and in tears as he followed up on the progress of the investigations. He called his daughter’s phone number. The phone had been switched off.

“I don’t know what to say. I have not gathered enough courage to go and view her body at City Mortuary, where it is being preserved,’’ he said.

CCTV footage retrieved from Ms Wambui’s workplace shows that she left for home at 8.30pm on Sunday. Mr Ngigi did not pick her up from work as usual that day.

Her co-workers described Mr Ngigi as a jealous lover and said Ms Wambui “had her own problems on love matters”, but did not go into details.

“Tuseme tu Bobo (Wambui) had her own problems on love issues and the husband was not comfortable,’’ one of her co-workers told the Nation in confidence. She declined to be named, saying police would summon her as a witness.

But Mr Ngigi denies claims that the couple had marital problems.

“We have never quarrelled and I have never suspected her of anything,’’ Mr Ngigi told the Nation at the Ruiru Police Station after being questioned by detectives.