Woman whose obituary was placed in newspaper turns up alive 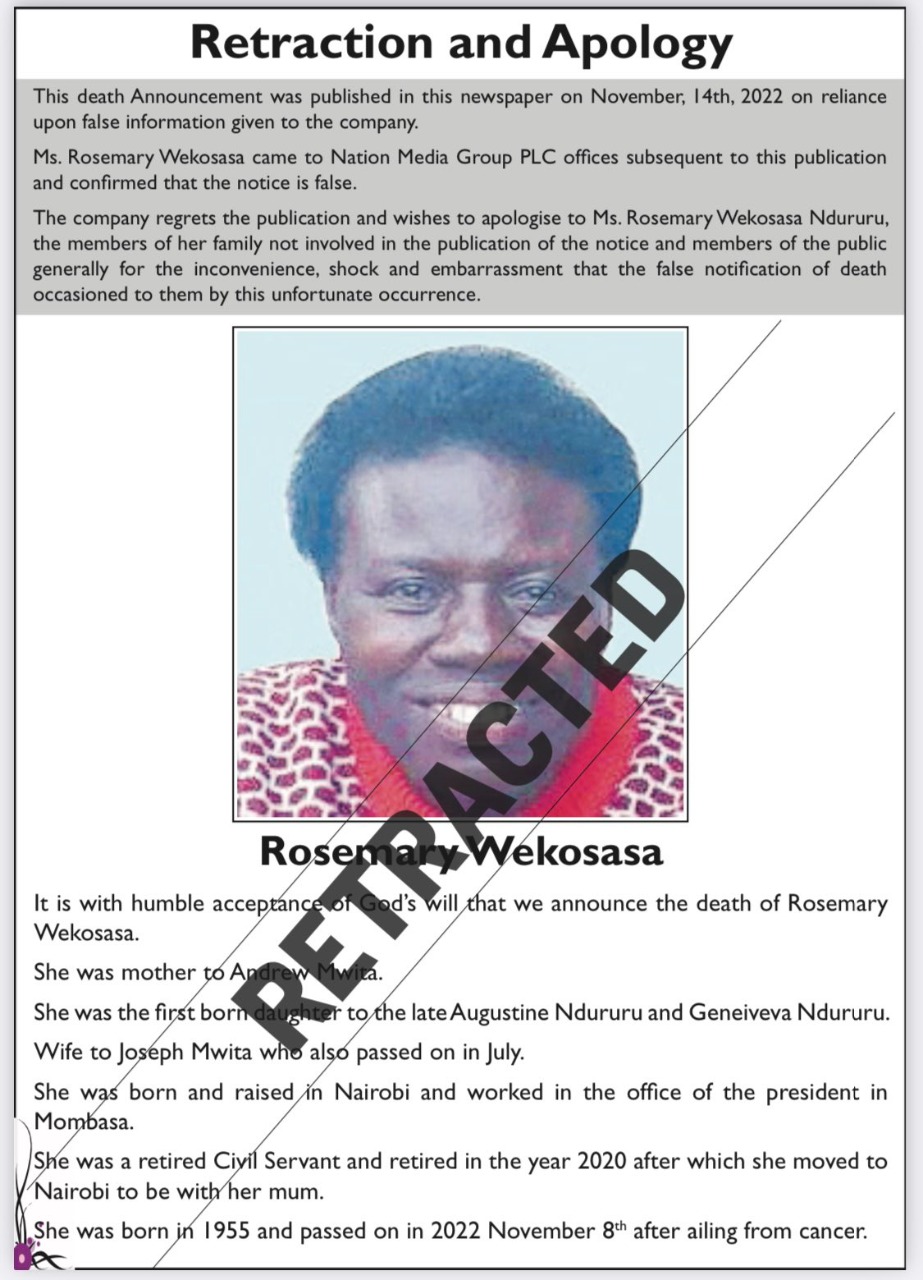 An obituary for a Kenyan woman who showed up alive at Nation Media Group’s headquarters on November 17, 2022, was retracted in the local newspaper.

Rosemary Wekosasa’s death and funeral were announced by a relative of hers.

“It is with humble acceptance of God’s will that we announce the death of Rosemary Wekosasa. She was mother to Andrew Mwita. She was the firstborn daughter to the late Augustine Ndururu and Genevieva Ndururu.”

“Wife to Joseph Mwita, who also passed on in July. She was born and raised in Nairobi and worked in the Office of the President, Mombasa.

She was a retired civil servant and retired in 2020 after which she moved to Nairobi to be with her mum. She was born in 1995 and passed on in 2022, November 8th, after ailing from cancer,” read the obituary.

In its statement, Nation Media Group said that the obituary, which was published on November 14, 2022, had been based on information that was discovered to be false.

“Ms Rosemary Wekosasa came to Nation Media Group PLC offices after this publication and confirmed that the notice is false.

The Company regrets the publication and wishes to apologise to Ms. Rosemary Wekosasa Ndururu, the members of her family not involved in the publication of the notice, and members of the public, generally, for the inconvenience, shock, and embarrassment that the false notification of death occasioned to them by this unfortunate occurrence,” said NMG in its statement.

Her son, Andrew Mwita, had placed the obituary, and Nation Media said they had taken action against Mwita.

“Nation Media does not condone such publication which goes against our editorial policy. We have taken immediate action against the person responsible for the placement of the announcement, including reporting the matter to the authorities for further action,” added Nation Media.

Andrew Mwita is a driver employed by the Nation Media Group.

US Real Housewife of Atlanta star and Kenyan hubby expecting baby no. 2