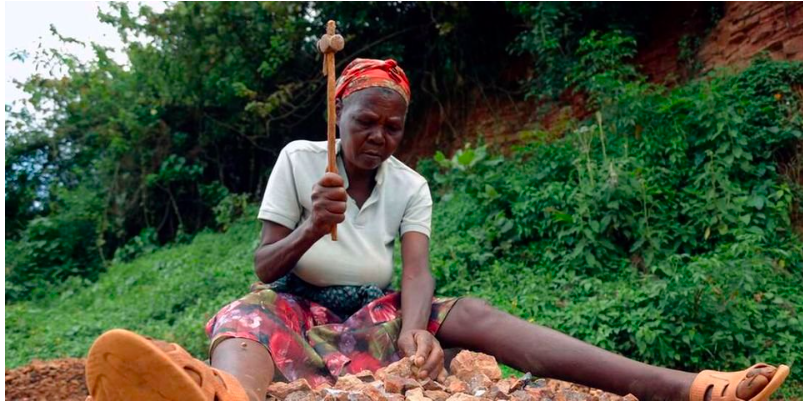 Their husbands are unproductive, idling all day in their Kiabiraa village in Manga, Nyamira County, drinking locally brewed alcohol.

As the men waste away drinking, their wives have become the sole breadwinners of their families.

In this part of Kenya, women choose to get married as a routine. More specifically, the Abagusii culture dictates that a woman should get married and bear children.

But children are not just children – boys count for more.

Those not blessed to bear male children are abhorred and life in the villages becomes a tad difficult for them.

In Kiabiraa village, a group of women, just like others in Gusiiland, got married and hoped to live happily ever after. 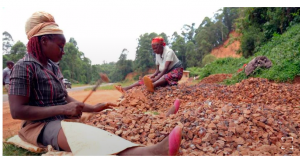 But woe unto them; life has not been easy after their husbands became habitual drunkards, leaving them with the heavy burden of fending for their families.

Hellen Kwamboka is now old, sickly and frail. But even in her condition, she has to get up and work. She manually breaks rocks to make gravel for sale.

The gravel is preferred in house construction.

Breaking the rocks is backbreaking. But she has done it for many years.

At the site, she lifts her small hammer and carefully hits the rock lying in front of her. It shatters into small pieces, adding onto an already formed pile of gravel.

She repeats the same procedure, all day, determined to make a sizable heap, which she says should be enough to fill a pickup truck. One pickup-full of gravel goes for Sh2,500. A medium truck goes for Sh9,000 and a wheelbarrow Sh150.

“To ensure we all benefit, we each contribute two or three wheelbarrows to a buyer. We at least get a customer who wants to fill a pickup or truck daily,” says the 67-year-old mother of two.

The women sit tactically on one of the piles of gravel. Their legs are wide open to create room for the rocks, prepared for crushing.

At times, the shattering rocks hit their eyes, injuring them. Other times, when the hammer misses its target, the rocks, it lands on their fingers. It’s a painful venture.

“When are injured, we are rushed to the nearby Manga Sub-County Hospital for treatment. We resume work after recovering,” Ms Kwamboka says.

But this they must do, otherwise their families will starve to death.

Each time they lift their hammers to hit the rocks, the sound and action of shattering stones is in itself an inspiration to them, that their food for tomorrow is assured. They live one day at a time.

Ms Kwamboka says she has done this work since she got married aged just 16.

“I have raised my children using the proceeds of this work. They are now grown up and fend for themselves doing other jobs,” she says.

“Unfortunately, my second-born son survived an accident two years ago and lost his leg. I take care of him as well, together with his father.”

Judy Kemuma got married aged 20. She was introduced to this work by her husband, but the man later pulled out, leaving her to struggle alone.

She has three children and has been taking care of them single-handedly.

“At times, my husband demands a share of the little I earn. I have no option other than to give him, otherwise there will be no peace in that house,” says the 35-year-old woman.

In this particular site, there are six women out of 12 gravel-makers.

They do not have a formal group, which would have helped them to organise themselves better.

In Gusiiland, excessive consumption of local brews has affected many people, making them unproductive.

This is a problem the national government, through the Ministry of Interior, has acknowledged and vowed to deal with.

Interior Cabinet Secretary Fred Matiang’i has time and again called on residents to resist the urge to drink the illicit brews.

Late last year, he said the performance of national government administrators will be gauged on how they tackle illicit brews and alcohol abuse in their jurisdiction.

“Their Key Performance Indicators (KPI) will largely depend on how they handle these societal issues,” he said.

County commissioners, chiefs and their assistants who condone illicit brews, drug and substance abuse in their areas of jurisdiction risked being sacked.

He spoke at Kebirigo High School in Nyamira County after meeting local chiefs and their assistants.

“The use of alcoholic and narcotic substances has contributed to the rise of defilement, rape, murder and other forms of crime in the society,” he said.

He warned that each administrator, right from chiefs and their assistants to the county commissioner, will be held personally responsible for any illicit brews and defilement cases in their jurisdiction.