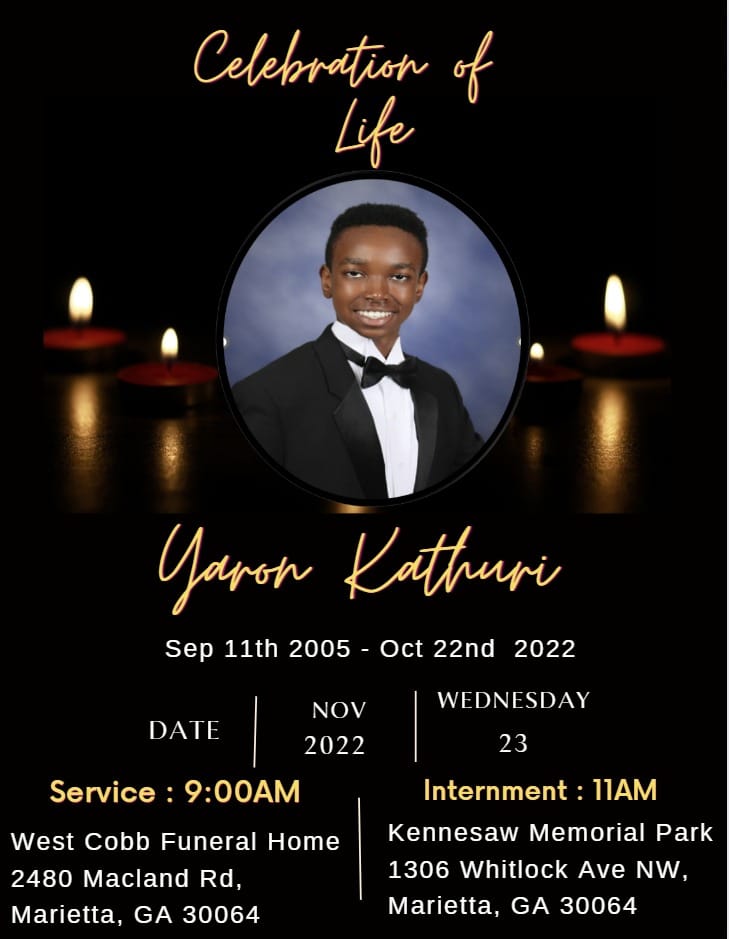 The body of 17-year-old Yaron Khaturi will be interred at Kennesaw Memorial Park on Wednesday November 23, 2022, the family has announced.

A memorial service will be held at West Cobb Funeraal Home and Crematory  (Address 2480 Macland Rd, Marietta, GA 30064) from 9am on the same day.

Yaron’s body was found in Douglas County, more than three weeks after he disappeared. And it turns out, it was Yaron who provided a clue that led a private investigator straight to him.

The search for the teenager took an unexpected turn when Douglasville police said they found human remains in the area the teen was last seen.

Yaron disappeared  inSeptember near the Arbor Place Mall, following which several search parties were arranged to look for him.

Douglasville Police Department announced in a Facebook post that Yaron’s body has been found. “On the morning of 10/22/22 human remains were located in an area between Arbor Station and Douglas Boulevard. This area is one of the last known locations of Yaron Kathuri, a 17-year-old missing since 9/28/22. Detectives are working to confirm the individual’s identity as well as the circumstances surrounding the death. No more information will be released until a positive identification is made and cause of death is determined,” they wrote

Despite the tragedy, however, his family wants to focus on positive memories. “In July, we did a road trip from here to North Carolina,” Kathuri said. “He just got his license. He was so excited. He asked me, ‘Dad, can I do the driving?’” These are are the fond memories he said he will never forget.

A memorial service was held two weeks ago at the Kenyan American Community Church in Marietta, Georgia.