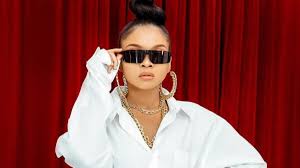 ‘Sukari’ Hitmaker musician Zuchu has revealed that she will still perform in Nigeria despite being involved in an accident that injured her.

Zuchu on a social media post stated that the accident injured her knee just a day before she traveled to Nigeria.

According to her, canceling an important show like the one she has in Nigeria is one of the hardest decisions she has had to make as an artist.

Her manager was however of a different opinion and insisted that she cancels the show.

The concert seeks to bring Africans, the diaspora, and people from across the world together to celebrate a continent home to more than 1.5 billion people and spawn new artistic expression. This year’s concert will feature artists from Nigeria, Sierra Leone, Tanzania, South Africa, and Congo. On Wednesday, the show will be streamed exclusively on YouTube at 19:00 CAT / 18:00 WAT.

The highly anticipated concert will showcase musical performances that stream to a global audience. From Nigeria, talented music artists D’banj, Davido, CKay, Yemi Alade, Reekado Banks, and Mayorkun will be performing at the virtual concert this year. Also performing from the West African region is famous Sierra Leonean recording and performing artist, Drizilik.

Also set to perform at the Africa Day Concert are singer-songwriter and poet Busiswa Gqulu and singer and dancer Kamo Mpela, both from South Africa. They are known for hit songs, SBWL and Nkulunkulu, respectively. Tanzanian singer, songwriter, and WCB (Wasafi Classic Baby) artist, Zuchu, will be performing her hit songs at the concert. At the same time, Congolese singer-songwriter Innoss’B, the Naomi Campbell crooner, rounds out the lineup of artists performing at the Africa Day Concert this year.